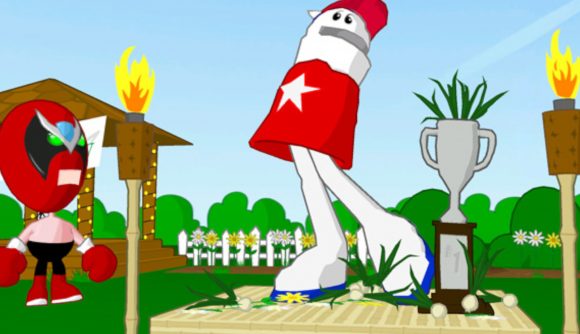 By the end of its run, Telltale was known primarily for adult-oriented stories in adapted franchises like Batman and The Walking Dead. But the studio’s forrays with episodic adventure games began with some much sillier licenses, and now two of those original series have returned to digital distribution services: Wallace & Gromit’s Grand Adventures and Strong Bad’s Cool Game for Attractive People (but you can play too).

Like many Telltale games, these titles disappeared from digital distribution services following the company’s shutdown in 2018, but now they’re back courtesy of Telltale. Er, yes, that’s the new Telltale, which picked up the rights to the company’s name and many of its games back in 2019.

Both Wallace and Gromit and Strong Bad are available on Steam and GOG for $14.99 / £11.39 / €12.49. They’re both comedic adventure games in the style of, say, Monkey Island – much like a lot of Telltale’s early output. Strong Bad in particular is a notable nostalgia trip in 2020, as we prepare for the final death of Flash and, thus, Homestar Runner itself. (Don’t worry, Flash games are getting several new chances at life, too.)

Telltale Texas Hold’em is also back on stores today, though even in 2005 it’s not like we lacked for ways to play digital, no-stakes poker.

Telltale’s Sam & Max just got a substantial remaster by its original developers, now working under the name Skunkape, so times are good for fans of the studio’s early output.

The new Telltale plans to bring The Wolf Among Us 2 back from the dead, but we haven’t heard much about the project since it was unveiled at The Game Awards 2019. Now that we’re closing in on the 2020 edition of the awards show, hope is alive that we’ll learn more about the return of Bigby soon – though we won’t know for sure until December 10.