Stronghold Crusader 2 launches tomorrow, having had its release date pushed back by three weeks to patch up some last few oddities and bugs, which is good news for fans of castles and knocking things over. I’ve been playing the base building RTS under the watchful eye of Simon Bradbury, lead designer at Firefly, who patiently peered over my shoulder as my idiot castle was stomped by the easiest AI opponent.

The strategy sequel is a bit like what the crusades would have been like if they took place between children in a sandpit, where castles and fortifications are hastily built before tantrum sets in, walls are knocked down and stones are chucked about the place.

Stronghold Crusader 2 is less about the intricate details of castle management and more about the immediacy of inter-castle warfare. It’s Command & Conquer on horseback, with bases sitting uncomfortably close together and resources scarce enough to prompt almost immediate quarreling.

Though combat focused, there’s a degree of managing your citizenry that must be done in order to sustain a healthy force. Houses must be provided to increase your population, granaries and stockpiles produce and store food, while quarries and woodcutters provide industry and materials. Wheat can be harvested and turned into bread. Taxes can be levied to increase gold at the expense of your popularity.

There’s little time to ruminate on governance however, instead you’re expected to fling these buildings down using trained muscle memory, hoovering up your nearest resources in minutes before beginning contruction of your castle walls. It’s an intensely skill based strategy game requiring a modicum of practice, as your AI opponents will waste no time to establishing their intricate and personality-led bases.

Castle walls are the best bit of Stronghold Crusader 2. They’re built along invisible gridlines but, unlike the previous Crusader game from seventy thousand years ago in the past, walls now appear in full three-dee and with proper physics. I dumbly threw down the most basic sets of buildings required before I could start work on my defences, and within seconds my walls were being dismantled by enemy footsoldiers armed with picks.

To defend your physics enabled walls archers can be planted atop your crenellated defences and traps can be scattered all around your castle. Under Bradbury’s instruction I placed tar pits along my eastern flanks, spawned a firepit near my archers on the castle wall, then ordered one archer to light his arrow and ignite the pits as the enemy approached. The result is an inferno that burns long enough to reduce troops to cinders. Tar is a limited resource however, so the canny player will be wise not to waste these traps on small intruding forces. 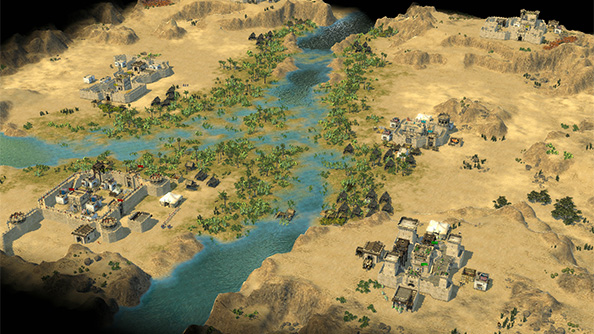 Eventually, and because I hadn’t spent much effort improving my defences, my opponent trundled over the horizon with a catapult and split my wall in two, crushing my archers who’d stupidly been huddled in one spot. The hole in the wall allowed enemy soldiers to flood in and begin setting fire to my most critical buildings.

The game is largely faithful to the original Stronghold Crusader, as such its still a defiantly hardcore RTS. What changes have been made serve to enhance the sort of strategic gameplay that was already here. Village estates are neutral towns between castles that act as control points, with some maps designed to lure players into scrapping over these objectives rather than pelting one another’s castles. Environmental hazards have been introduced too, such as tornados that pelt armies or locust swarms that devestate crops.

You’ve also got a handful of new units. Slaves can now have a slave driver, whose cracking whip buffs their attacks and movement speed. The wolf catapult doesn’t catapult wolves, but it does have a honking great wooden wolf head bolted to its front. Costing five times as much as a regular catapult, it’s one of the game’s most powerful wall-crackers. You can also hoik lion corpses and bags of camel heads over walls to spread disease.

Players can now co-operatively control the same castle, something Bradbury admits was trivial from a technical perspective but unexpectedly throws open the multiplayer game to some very interesting changes, as you effectively have two cursors working for one castle. Allies with AI players are more involved too, requiring that you appease them with resources and cash before requesting favours such as attacking or defending other castles.

Smaller tweaks like the ability to utilise formations will perhaps be more apparent to fans of the original game. Crucially, Firefly have taken great care to keep Crusader 2 laser focused and spiritually bound to its predecessor’s strengths, with a skirmish trail of campaigns versus AI opponents still at the core of the RTS they’ve tried to reproduce.

It’s designed for the fan, as well as anybody who missed the original when it rolled around, an RTS that’s since been regarded as a castle-building classic. Nobody is more aware of the shortcomings of most recent series main-entrant Stronghold 3 than Firefly either, who place the blame squarely at the doorstep of scheduling obligations to their publisher at the time.

In contrast, Stronghold Crusader 2 is self-published and, as evidenced by its capricious release date slip, will arrive in the form that Firefly mean for it to be experienced. The Steam release also plugs it into Workshop-powered custom map sharing, while plans are already in place for additional content to be released further along the line. So that’s all lovely. Personally, it’s refreshing to a see a strategy game that’s not about ganking and lanes and all that funny MOBA business, just good old men on horses with catapults lobbing disease-bloated animals through a peasant’s window.