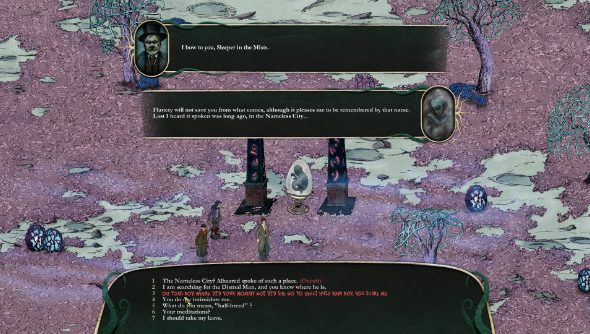 Stygian: Reign of the Old Ones is a Lovecraftian RPG with turn-based combat, taking you on a sanity-draining journey into the abyss. It sounds a lot like Twitter.

For more chatting and fighting, check out our list of PC’s best RPGs.

The supernatural RPG is based on the works of H.P. Lovecraft – hopefully minus the racism – and plonks players in a world where the line between dimensions has blurred, peeling back the smokescreen and revealing the true, dark nature of the world.

You’ll also get to shoot weird creatures in the face in tactical turn-based combat scenarios, or you can choose to chat to some of these strange, otherworldly inhabitants.

In Stygian, you’ll be able to create your character from scratch with a selection of archetypal backgrounds with different origin stories, attributes, skills, traits and belief systems which all feeds into the dialogue system, presenting you with different choices based on your character creation decisions.

Madness being a core pillar of Lovecraft’s works, each battle will take its toll on your characters, with magic use especially taking a toll on their sanity. It sounds like an interesting one, and you can keep up with its progress on Steam Greenlight.

See the first gameplay trailer below, and if you like it you can leave a comment in the abyss just underneath: