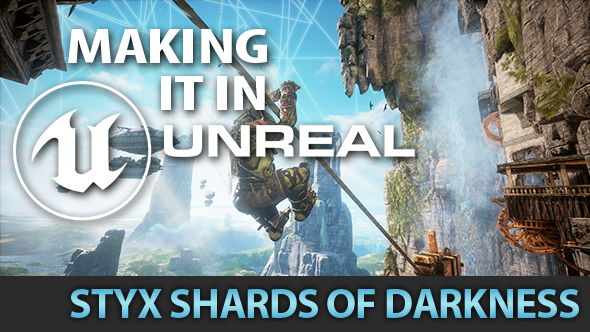 2014’s Styx: Master of Shadows was a game about a goblin with a magpie’s eye for shiny things. So it seems fitting that, when developers Cyanide realised they had a rough diamond, they decided to keep hold of it – prototyping new ideas for a sequel almost immediately after release.

“We had some good feedback from the press, and most of all from the players,” remembers lead level designer Julien Desourteaux. “People liked the characters. We wanted to polish that.”

Two and a half years later, Styx: Shards of Darkness sits proudly on Steam with a prized ‘Very Positive’ user rating. The climb Cyanide took to get there has seen them reach new technical heights.

To the garage! Time for an engine swap 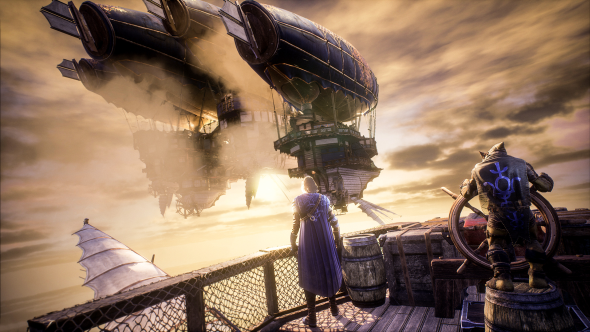 The most significant shift in Cyanide’s working process for Styx’s second outing has been an upgrade from Unreal Engine 3 to Unreal 4.

“It’s all about improvement,” Desourteaux explains. “We changed the engine, [and] that allows us to have better graphics and better cinematics as well. So it’s great to tell a story and to showcase a lot of different environments.”

The change was relatively easy for Styx’s level designers, who found themselves working with familiar-but-improved tools. It was harder on Cyanide’s programmers – but the studio have been in regular contact with Epic for help.

“We have a lot of conversations with them,” he says. “They visit us sometimes during the production so we can address our problems. Sometimes they take our solutions as well, to implement it in their engine, so it’s an exchange.

“There are a lot of Focus [Home Interactive] developers that are in Paris using Unreal Engine as well, so we we can share our experiences.” 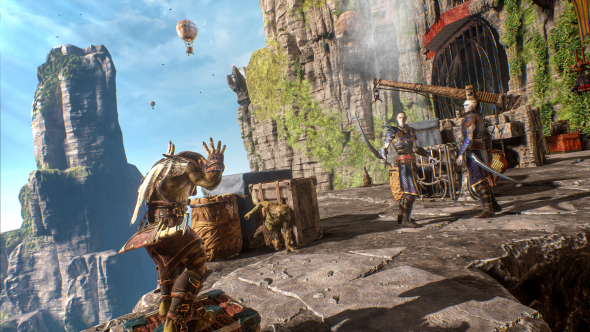 The way a game is lit isn’t just an aesthetic choice – and that’s more true in the stealth genre than any other. Cyanide have designed a system of gradient colours to replace Styx: Master of Shadows’ binary lighting, so that their goblin protagonist is never simply ‘visible’ or ‘invisible’. Enemies react dynamically depending on what level of lighting he’s in.

The engine upgrade also grants Cyanide more freedom when it comes to enabling comprehensive shadows at long distances – essential when players come to plot a path through the sequel’s large and layered environments. The studio’s art team have been influenced by Escher – the 20th century artist best known for his endless staircases.

“Some of them are very compact, others are very vertical,” notes Desourteaux of the levels. “We like to play with different structures to renew the experience for the player.”

One level, for instance, finds players fleeing an airship and dealing with vertigo.

“We like to play with this vertical effect and it’s all about doing metaphors,” says Desourteaux. “You are small, the world is very big, and so I like this tension you can communicate to the player through the environment.”

The art of being dumb 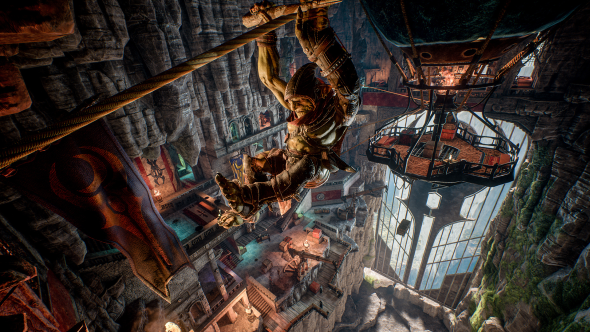 The more sprawling and layered those levels get, the more complex a challenge they become for their AI inhabitants. Thankfully, trading up from Unreal Engine 3 to Unreal 4 for the sequel has enabled more advanced pathfinding to match.

“Now our AI can climb as well,” says Desourteaux. “They can jump – not everywhere, not like Styx, but sometimes they can go on the roof.”

Even as Cyanide grant their guards greater intelligence, however, they need to take some away.

“Of course it’s always a challenge because it’s a balance between too smart and too dumb,” explains Desourteaux. “Sometimes the AI have to be dumb in a stealth game like Styx.”

Styx himself is no muscled covert operative but a scrappy little creature, and so the consequences of discovery are often lethal for him. Because of this, Cyanide have their AI play dumb – perhaps searching beneath the table next to the one Styx is hiding under, giving the player a chance to escape to a new vantage point. 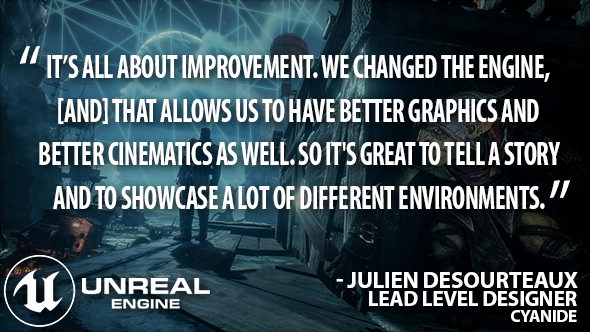 There are limits, of course: it’s a very different scenario if the same guard were to see Styx stuff himself beneath that table. In that case, he would try to grab the goblin rather than engage in the pretense of searching.

“It’s this kind of balance that is quite hard,” says Desourteaux. “It’s all about the timing you have to give to the player to try to perform a kill or stuff like that.”

The end result is a game that successfully evokes Thief and the classic stealth games of yore. Next time you play Shards of Darkness, perhaps you’ll notice the gradients of light going into it too.

Styx: Shards of Darkness is available on Steam. Unreal Engine 4 is now free.

In this sponsored series, we’re looking at how game developers are taking advantage of Unreal Engine 4 to create a new generation of PC games. With thanks to Epic Games and Cyanide.