Cyanide’s goblin assassin game Styx: Master of Shadows is getting a sequel sometime in 2016 and it will have you stealthing and elfing through bigger, Unreal 4-powered environments.

Our list of upcoming PC games just keeps getting bigger and bigger. It certainly isn’t as stealthy as Cyanide’s goblin murderer.

A bunch of new screens have been released to show off the increased size and improved fidelity of Styx’s new stomping grounds. 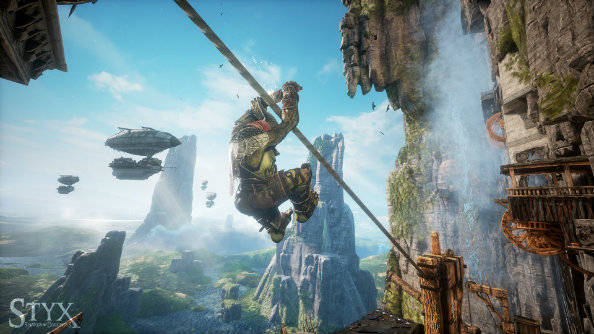 From the City of Thieves, a den of villainy built from the wreckages of lost ships, to the great Elven city of Korangar nestled in the mountains, these are big semi-open, hub-style areas with multiple routes and plenty of chances to slip by your enemies from above and below.

Here’s the official blurb: “Following the fall of Akenash tower, an extraordinary matter has forced Styx out of hiding to infiltrate Körangar, the city of the Dark Elves. Supposedly impregnable, a diplomatic summit offers Styx a chance at slipping in unnoticed, as he learns that the event is nothing but a mere [facade]…” 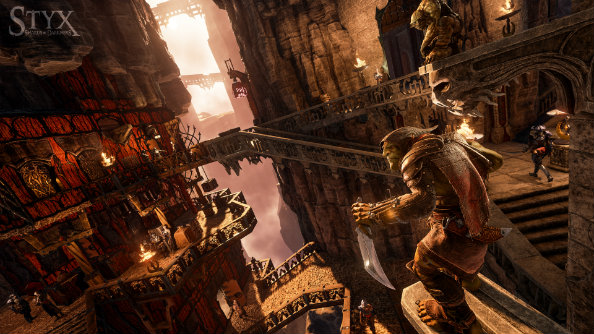 “Embark upon a stealthy adventure with new enemies, new environments, and a plethora of new mechanics aimed at refining the abilities and movement of Styx; grappling around corners, climbing ropes, and using his trusty knife as a zip-wire. Shards of Darkness aims to offer unparalleled freedom of movement, along with refined stealth and assassination mechanics, expanding and improving on the strengths of Styx: Master of Shadows.”

Our Jezza wrote a cracking feature about the design process behind Styx: Shards of Darkness, and how the switch to Unreal 4 has influenced development. Read it or we’ll send a killer goblin after your mum.