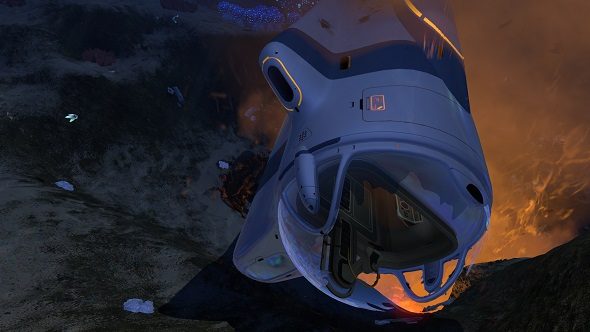 For open world explorers, have a look at this list of great PC sandbox games.

Designed for exploring the hostile depths of Subnautica’s waters, the Cyclops can now activate ‘Silent Running’ mode which transforms the vessel into a slow moving stealth sub. When in Silent Running, all of the Cyclops’ outside lighting is turned off, its interior lighting changes to red and it moves “exceedingly slowly”. This mode is perfect for sneaking past dangerous sea creatures, who now have a real interest in attacking your vehicle.

To account for this increase in creature aggression, the Cyclops has gained some helpful upgrades which should stop explorers becoming a snack for some deepwater horror. The new sonar scan and display will point out nearby threats while you are cruising through the ocean, with the Cyclops able to launch decoys to draw away any dangerous creatures. If things do go south, the Cyclops is now equipped with an emergency shield which provides 15 seconds of protection. This shield should only be used sparingly though, as it rapidly drains your vehicle’s energy. Just in case damages do start to accrue, the new ‘Fire Suppression’ switch should douse any flames raging within your ship.

Should everything fail and your ship ends up the chew toy of some underwater beast, the Cyclops leaves a large wreckage wherever it was destroyed. While you cannot repair the ship once it has become a wreck, explorers can salvage certain materials which may help build a replacement submarine.

For the full patch notes on the Silent Running update, make sure to check Subnautica’s official site.