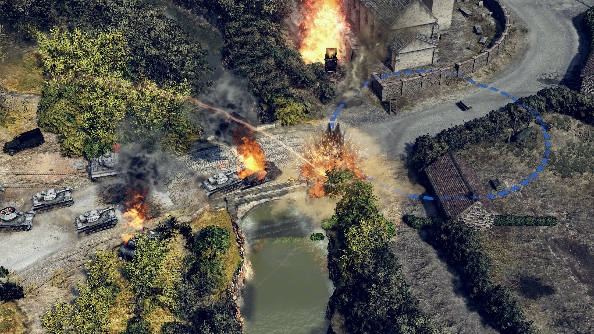 Did you ever play Sudden Strike? The early 2000s RTS series has a dedicated audience, but hasn’t been seen on any new release schedules for quite some years. If you are part of that fan base though, Hungarian developer Kite Games has some news for you: a fourth game will be rolling onto the battlefield next year.

There’s plenty of strategy and tactics to be found in the greatest WW2 games on PC.

“We’re bringing the series back!” enthuses Christian Schlütter, producer at Sudden Strike 4’s publisher Kalypso. “There are so many remakes at the moment, we’re not doing a remake. We are doing a full-fledged fourth title and it has lots of new stuff in it.”

Sudden Strike 4 is a World War II RTS, with campaigns following Allied, Soviet, and German forces through the bitter years of conflict. Its mix of infantry and vehicle combat is notably traditional, but the series is best known for its complete abandonment of base-building. And with this new entry being a sequel to those games from the previous decade, you can expect those features (or lack thereof) to still be present.

“You need to work with what you have,” says Schlütter, explaining the set of units the game provides you with at the start of a mission. “You’ll get reinforcements, and you can take over units. If you go through the map it’s wise to take all the AT [anti-tank] guns that are lying around, get rid of the crews that occupy them, and then use them to shoot down the enemy.”

In practice, this makes certain elements of Sudden Strike 4 quite challenging. Playing as the German army in a hands-on session, I roll a small group of tanks and soldiers into Stalingrad to begin my offensive. Accompanying them are two trucks; one filled with fuel, and the other a collection of munitions and engineer staff. As my tanks cause devastation in the snowy streets, they periodically need refuelling, rearming, and patching up by their support crews.

But some hasty choices saw these trucks destroyed in a landmine accident, and gradually my fighting force was ground down by enemy munitions until I was out of ammo and so damaged I could do nothing but stare angrily at the Russians storming my position. Losing just two flimsy trucks meant my force was on the inevitable decline to their demise.

“That is there to tell you that each unit is critical and you need to be very careful not to lose them,” explains Schlütter with a smile. No kidding. 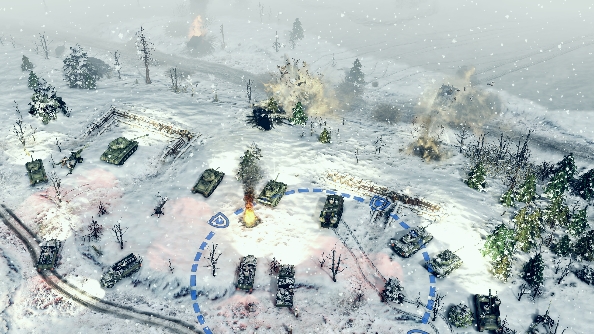 While the value of each unit is distinct and part of a system that feels progressive, overall Sudden Strike 4 feels like a game from the past. That certainly seems to be Kite Games’ aim: there is a lot of talk of the series’ hardcore fan base. It’s what influenced them to create a true sequel, rather than reboot it for a new audience. “There is still an active community playing Sudden Strike 1 and 2, so why not pick up those people and say ‘This is the fourth game, enjoy it!” says Schlütter.

The first two games are discussed a lot as publisher Kalypso shows off the game at the hands-on event, making the third game incredibly visible via omission. I ask Schlütter why Sudden Strike 3 is being left off the table.

“The third game wasn’t that well-received with the community, and it had some problems. So we are looking very much more to Sudden Strike 1 and 2,” he explains. “There was a lot of problems with visibility. They introduced 3D, whereas the first two were in 2D. The 3D [camera] was a nice touch, but the downside was the readability of the screens. You can’t see where your infantry is very well.”

“Players appreciate Sudden Strike 1 and 2 for their depth and the stuff they can do with their units, like taking over enemy units and re-ammunitioning stuff, and we wanted to bring all this stuff that the core fans appreciate and want from a new Sudden Strike game,” he added. 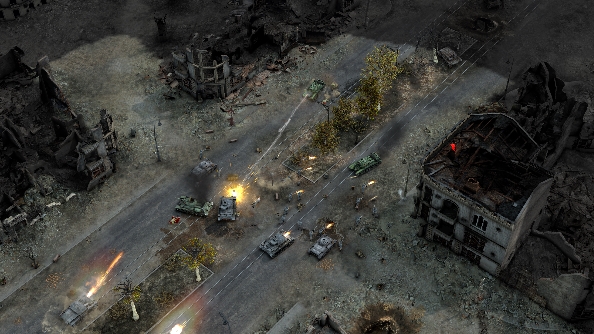 And those features are very much what makes Sudden Strike 4 the game it is. The fixed camera, with just a token amount of zoom, certainly means that the third game’s issues won’t be plaguing this release. I can’t help but wonder if that’s fan service standing in the face of progress, though. Modern RTS games typically go for 3D cameras because they offer enhanced visibility, not worse. Perhaps improving the camera, rather than ditching it altogether, would have been a more interesting option.

But if classic RTS action is what Kite are going for, that’s what they’ve got in Sudden Strike. It has that mid-point scale that demands a very traditional approach to tactics; it’s not the overwhelming numbers of StarCraft, nor the smaller, individual unit focus of Company of Heroes. As such, it feels very straightforward to play. Tanks are big and heavy, infantry less so. It lacks the intensity of Company of Heroes’ tense scramble for cover, but feels comfortable in its uniform.

Schlütter seems happy with the scale and pace they’ve settled on. “I like to think about Sudden Strike as each mission being some sort of grand puzzle,” he says. “So you slowly move your units forward, scouting and stuff, and then you think about how you assault the next part of the puzzle. The pace is a little slower than other RTS games to promote tactical play.”

Also promoting a tactical approach is the game’s badge system, which displays an achievement-like medal on-screen each time you perform a strategic action. “We want you to notice right away when you’ve done something tactically good,” explains Schlütter. “We want players to always feel rewarded for playing well, and not punished for playing bad. At the end of a mission you’ll get a list of stuff that awarded you bonus points, so next time you’ll think ‘I’ll try this more’. You’ll play much more tactically and savvy as you progress.” 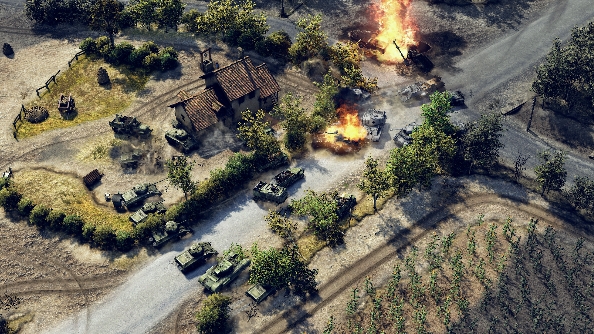 Talking of tactics, Kite want Sudden Strike to be as realistic as possible, and many gameplay approaches have been taken wholesale from the desks of military generals. “We start from what would actually be authentic, what did armies actually do? We put that in the game and see if it makes sense from a gameplay perspective,” says Schlütter. “Sometimes we need to get rid of stuff because it’s not fun to play. But I must say that’s not often!”

“That’s what these hardcore players really want,” he adds, further clarifying exactly for whom Sudden Strike 4 has been created. This is an early 2000s RTS with a little modern sheen, and that will no doubt delight the series’ long-term fans. Quite where that leaves it for the wider group of strategy players though remains to be seen.

Sudden Strike 4 is due to release in the second quarter of 2017.