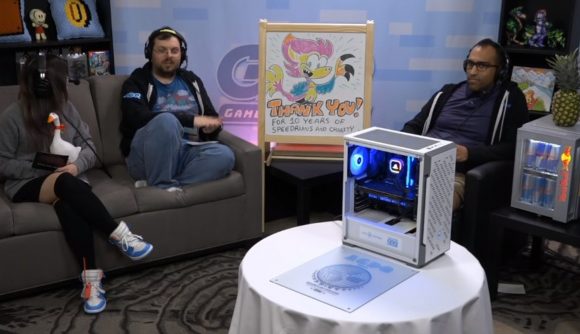 This year’s Summer Games Done Quick, wherein a host of speedrunners were expected to come together in august to run games together for charity, has been switched to an online-only affair, in accordance with safety protocol surrounding the coronavirus.

The announcement was made this week that the event, initially set to run August 16-23 in Bloomington, Minnesota, would not have a physical gathering. Instead, everything will be run remotely through Twitch, in what is now called Summer Games Done Quick 2020 Online. Traditionally, Games Done Quick involves intersecting streams running through-out the day and night at the hosting conference center, where players would be joined by commentators and an audience.

Unfortunately, the current pandemic has made placing that amount of people together a questionable idea, and following a two month postponement, the Games Done Quick team has decided it’s best to move to streaming instead. “We would like to thank the community for its patience while we were figuring out the best way to proceed with Summer Games Done Quick 2020,” Kasumi Yogi, Director of Marketing and Business Development at Games Done Quick, said in a statement. “We’re excited to continue showcasing some of the most talented speedrunners in the world while observing best practices to keep everyone safe in the midst of a global pandemic.”

Further details of how to apply to be a part of the event, and how this might effect your existing application, can be found on the official site. All donations made during Summer Games Done Quick Online will go to Doctors Without Borders. Since 2010, the bi-annual events have raised $26 million for an array of charities, including AbleGamers, the Organisation for Autism Research, and the Prevent Cancer Foundation.

The list of runners is still to be finalised, but don’t be surprised if Doom Eternal, Minecraft, or even Stardew Valley make appearances