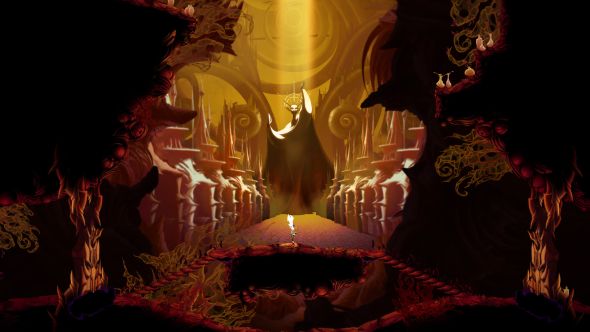 Sundered, the latest project by Thunder Lotus Games, the people who brought you giant-slaying RPG Jotun, has smashed its Kickstarter target; in less than 24 hours it had reached 150% of its initial goal of CA$25,000.

For more bright ideas and quirky art styles, check out the best indie games on PC.

The success surely owes much to Jotun, a journey through Norse mythology with a beautiful hand-drawn style. It too achieved its Kickstarter goal and has been well-received on Steam, where it is currently rated 84% positive. Thunder Lotus say that, as with Jotun, if you backed Sundered at a certain tier you’ll get an automatic invite to the beta, where you are encouraged to give feedback.

Sundered is billed as “a horrifying fight for survival and sanity”. You’ll play the wanderer Eshe, exploring a ruined world of ever-changing caverns overrun by eldritch horrors. The game will set you against gigantic bosses, which can only be defeated by spending your very humanity to harness the power of corrupted relics.

It all sounds very dark, but features lusciously colourful artwork in a similar hand-drawn style to Jotun. To judge from the gameplay in early trailers, it’s an action-platformer with a somewhat Arabic aesthetic and futuristic elements.

For more information on Sundered, check it outon Steamor see its Kickstarter page. Thunder Lotus Games are aiming to release it in July this year.