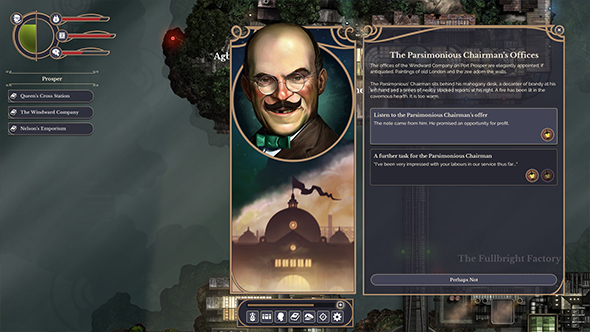 Sunless Sea was one of the best games of 2015, a narrative adventure about confronting Lovecraftian horror in the deep ocean, and its success led developers Failbetter Games to Kickstart a sequel and launch their own funding service to help bring other story-driven indies to life.

Unfortunately, six months after launching in Early Access, Sunless Skies has not done nearly as well as its predecessor. According to a new Kickstarter backer update, the game has sold roughly 15% of what Sunless Sea did in the same time period, which the developers attribute to launching too early against a far more competitive field of titles.

“With much regret,” the developers say, “we have just completed a redundancy consultancy process and four of us are leaving as a result.” The company’s struggles mean that Sunless Skies will not make its May release date, but they promise the game’s development is progressing on a solid pace and “there’s no danger of us failing to deliver the project you backed.” A revised launch window is set to be announced this month.

Without the funds to spare, the company will also suspend their Fundbetter program, and will soon prepare to launch the final update for Sunless Sea.

In addition, the Fallen London mobile app will close down this year, though the website will relaunch into more modern-looking version.

“We’re keenly aware that, like all indie studios, we are a small and vulnerable vessel,” the developers say. “We’re committed to keeping this studio open and making games. We’re in no danger of failing to deliver Sunless Skies, and never have been. The decisions we’ve made over the last few months will enable us to make more games after Sunless Skies and be around for many years to come.”