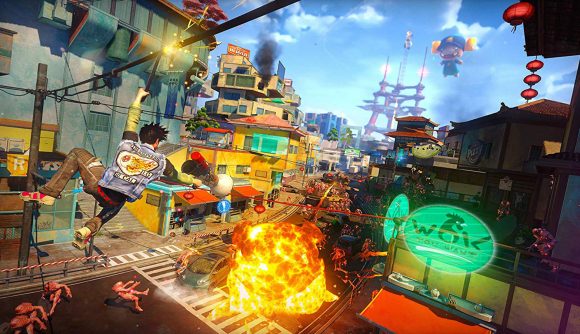 Sunset Overdrive is out now on Steam. The worst kept secret in videogames was finally confirmed just yesterday, and now we can finally stop talking about leaks and rumours and speculation. It’s out. You can buy it for $19.99 / £14.99 / €19.99. It’ll also be available on the Windows Store, if that’s your thing.

The package will include all the big DLC packs released on Xbox One: Mystery of the Mooil Rig, Dawn of the Rise of the Fallen Machines, and the Weapon Pack. Curiously, the store description specifically notes that this is the game’s “single-player campaign.”

The early achievement list (via TrueAchievements) on the Windows Store doesn’t include the goals associated with the online Chaos Squad mode. Looks like you’ll be playing this one solo.

If Sunset Overdrive passed you by a few years ago, allow me to refresh your memory. The shooter is set in the fictional Sunset City in the year 2027. Following the release of a new energy drink, people begin turning into mutants, and the entire city is quarantined. It’s your job to use the game’s fast-paced combat to defeat these mutants and save the city.

The game was originally developed by Insomniac Games, who went on to produce PS4 exclusive Spider-Man earlier this year. Over the past few years, many of their resources will have gone on producing Peter Parker’s latest videogame adventure. It’s possible that a smaller team has been working on a PC version of the game, but equally likely that the port has been handled by a third party. Insomniac is yet to make any official comment about Sunset Overdrive PC.

It’s been a heck of a ride getting here. An early Amazon listing (since removed) revealed the Sunset Overdrive PC price and release date.  According to the box art, this version comes courtesy of THQ Nordic. The publisher has previously partnered with Microsoft to publish titles like ReCore and Super Lucky’s Tale on Steam and physical PC discs. That, along with a SteamDB listing, told us that yes, the port would be coming to Valve’s store too.

There’s never been any word on any new Sunset Overdrive games, despite the original setting itself up for a sequel. Insomniac has obviously had its hands full recently, but a PC port could pave the way for further releases.