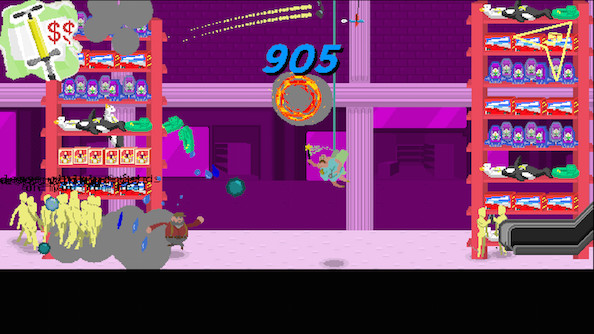 Love it or loathe it; it’s no secret that we’re all a wee bit addicted to social media. In Super Flippin’ Phones, your character is just a little bit fed up of the technology that dominates us all, and decides to take matters into his own hands (quite literally).

Super Flippin’ Phones is simple enough to grasp, as all you’ll be doing in this wacky, retro-inspired platformers is failing your arms about in a bid to send people’s phones flying out of their hands as your traverse from level to level. Of course, because it isn’t a particularly nice thing to do, your friendly neighbourhood mall cops are going to have something to say about your shenanigan, and will try to put a stop to your lovely combos throughout each level.

We’ve got 100 copies of this zany platformer to give away. All you have to do for a chance to win is enter via our widget below. The actions you complete in the widget – such as following us on Twitter, the more chance you’ll have of winning. We’ll also need your email address. Not for anything nefarious, just so we can email you a code if you win!

Should you win, you’ll be given a code to redeem on Steam. Just click the ‘Add A Game’ button at the bottom of the Steam client window, and ‘Activate a Product on Steam’. Follow the instructions, download the game, and get playing!

Interested in more giveaways? We’re doing them all the time here at PCGamesN. Just throw us a Like at the PCGamesN Facebook page, and we’ll keep you in the know.