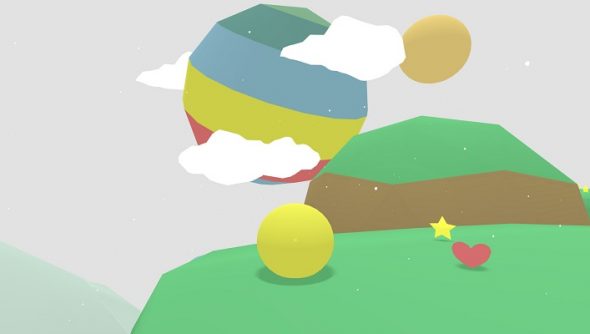 Swapping first person shooter for third person platforming, Quicktequila are going back to their pastel coloured world with Super Lovely Planet. Rather than running around sickly sweet time trial courses trying to shoot angry cubes as fast as possible, Super Lovely Planet has you rolling and jumping around sickly sweet time trial courses as fast as possible.

For more indie game goodness, have a look at our lost of the top PC indie games.

There are no super intricate techniques to learn, no extra powers to unlock; all you need in Super Lovely Planet is rolling and jumping. Much like the original Lovely Planet, the controls couldn’t be simpler. The only problem is the sadistic level design which slowly turns the Lovely Planet into the Hellish Planet.

Citing “the old school difficulty of classic NES platformers”, Super Lovely Planet attempts to bring that unique challenge into the third dimension, by way of a giant yellow ball, devilish level design and cube people of various different emotions. I imagine the emotional curve most players will experience while playing Super Lovely Planet is rage, then depression, then resolve, then depression again.

Quicktequila cites games like Castlevania and Ghosts ‘n Goblins in development diaries for Super Lovely Planet, even implementing “the infamous knockback from Castlevania”, where getting hit usually sends you flying off an edge and to your doom. Much like the 3D Sonic games or Super Meat Boy, players will be graded with a score from F to S Rank, with the S Rank being awarded to players who get through the level as quickly and as optimally as possible.

Thank god the colour scheme is so easy on the eye, as Super Lovely Planet would probably result in a few more broken computers if the game’s visuals weren’t so calming. Quicktequila didn’t release an exact release window for Super Lovely Planet, but it should launch sometime in 2017.