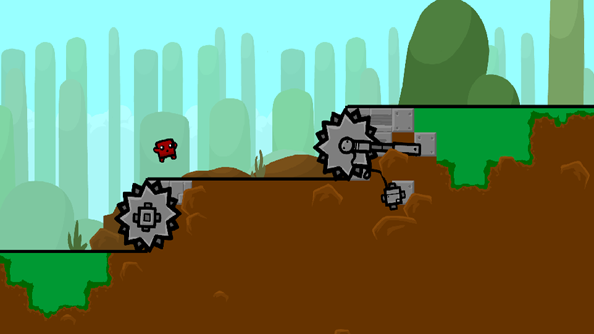 Super Meat Boy Forever is the sort-of sequel we were expecting to come to Steam this year – but seemed to be sat sodden and forgotten while series co-creator Edmund McMillen occupied himself with the ickily-titled Binding of Isaac DLC Afterbirth, and police line-up whodunnit Fingered.

But it’s now McMillen’s “primary project”. Squishy, sentient steak is back on the menu.

“Super Meat Boy Forever is back in development again and is my primary project at this point now that Afterbirth is basically complete on my end and Fingered is [almost] out,” he told Destructoid.

McMillen had taken a six month break to prepare for the birth of his daughter – before wrapping up work on Afterbirth and developing Fingered as a kind of game design palate cleanser. He’s now regrouped with Super Meat partner-in-crime Tommy Refenes.

Super Meat Boy Forever is an odd one: conceived around a simple control scheme to avoid a finickity port of Super Meat Boy on touchscreen platforms, it’s coming to Steam with the same cruel precision of the original. It’s no endless runner – but early gifs suggest longer, less dense levels.

Cat-hoarding sim Mew-genics, meanwhile, will remain on hold until after Forever is out.

Which of McMillen’s myriad projects are you keenest on? Here’s what he’d do with a Binding of Isaac 2.