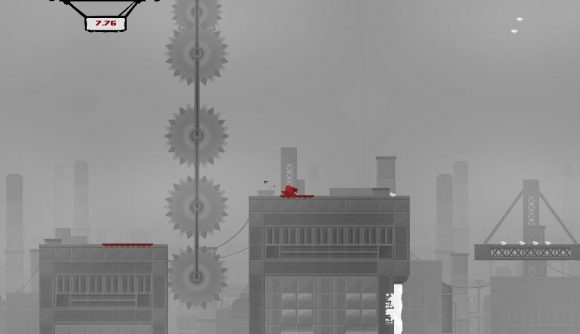 Epic is giving away free copies of Super Meat Boy, eager to encourage more players to use its new storefront.

All you have to do is log in to the Epic Games Store and click the Super Meat Boy banner. You’ll be taken to the game’s store page, where it’s currently listed at $0.00. Just add it to your cart and check out, and Super Meat Boy will appear in your Epic Games library.

If you haven’t played Super Meat Boy, it’s a hardcore, fast-paced platformer that has you play as the titular Meat Boy, who is trying to save his girlfriend Bandage Girl from the clutches of the evil Dr. Fetus. Along the way, you’ll encounter deadly traps, huge bosses, and ruined factories full of salt, and as Meat Boy you’ll have to rely on quick reflexes and snappy jumping to meet each challenge.

Super Meat Boy originally launched in 2010, and it’s usually $14.99 on the Epic Store. It’s a game that holds up well, and it was created by Tommy Refenes and Edmund McMillen, who went on to make The Binding of Isaac after shipping Super Meat Boy.


Epic is offering the game for free until January 10, so you’ve got some time to pick up your copy. Earlier this month, Epic had offered up free copies of the excellent Subnautica, and the store has lined up several exclusives (including Ashen and Hades) to help encourage players to make the jump from Steam or other online storefronts.
{"schema":{"page":{"content":{"headline":"Free games: Grab a free copy of Super Meat Boy from the Epic Store","type":"news","category":"super-meat-boy"},"user":{"loginstatus":false},"game":{"publisher":"Headup Games","genre":"Indie","title":"Super Meat Boy","genres":["Indie","Puzzle"]}}}}