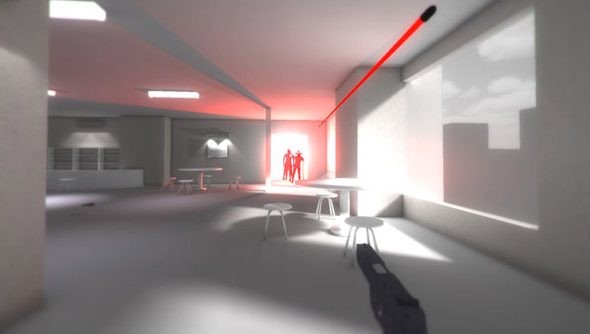 Superhot is a shooter with a relaxed attitude to the march of time. It began life as the one webgame we were happy not to hide away in an incognito tab, became the fastest Greenlit game on Steam, and ended the summer with two and a half times its Kickstarter target.

But just as this first-person Frozen Synapse starts to look like a dead cert, one seventh of the game’s team has left the building.

“For the last couple of months I’ve been trying to figure out whether the state of my education makes me happy, whether my skillset makes me happy, and whether working on SUPERHOT makes me happy,” said codewrangler and PR man Luke Spierewka. “The answer was ‘probably not’.”

Work on the game will continue unabated under its six-strong team in Poland. But Spierewka will return to technical university to finish his bachelor’s degree and “experiment with more areas of game development”.

“The thing is, I’m still feeling a bit uncertain about what I want to do with my life,” he explained on Twitter. “I love games and working on games, and I’m almost sure that in the near future I’d like to live and work outside of Poland, but other than that I still don’t know exactly what it is that I’d like to do.

“I’m at a point in life where I don’t have a lot of strings attached and I don’t really have to care about money, so this is probably the best time to make risky decisions like this one.”

Attempting to juggle two projects would have been bad news for both Sierewka’s studies and Superhot, he decided – and development will continue at a nice clip without him.

Since late July, Spierewka has been off PR duties and working with tools, graphics and “minor” programming – jobs that “helped out with the production” but can be picked up by other team members.

“Big thanks to the team I’ve worked with for the last 13 months, with whom I’ve been able to take this small thing and really put it on the map,” said Spierewka.

There’s every chance Superhot will be supermassive – it’s tapped into the same weakness for bullet-time that sold Max Payne 7.5 million times over, as well as something a little more cerebral. Did any of you lot back it?