Piotr Iwanicki’s GDC 2016 talk about SUPERHOT was certainly one of the oddest I’ve seen. Over the course of a half hour, Iwanicki took us through the history of the mega-popular high-concept shooter while constantly pacing the stage and clearly speaking mostly on the fly. In the talk were all sorts of tidbits about the nature of the narrative and how development had progressed.

Looking for Hollywood action? Here are the best FPS games on PC.

First, that SUPERHOT originally had large exploration sections, but they were cut to keep the shooting pure and the central mechanic of the game in place.

“When you’re walking between bullets, and moving between enemies and fast action happening,” says Iwanicki. “Then it’s a much different speed than moving in the context of the environment. So for [that] to be satisfying, the walking has to be quite slow. Our gameplay with just exploration was quite boring.” 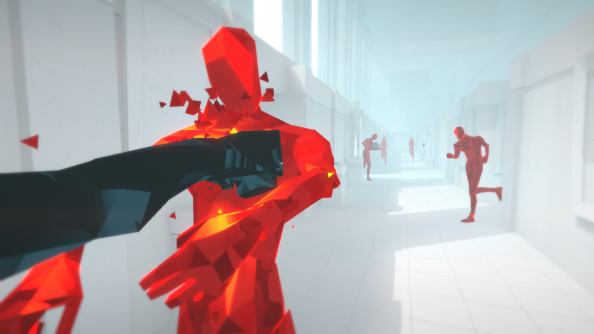 The few times in a SUPERHOT level where you must chase down an enemy you’ve lost, or move for an extended period, will confirm this. Not only is it slow, but it just feels wrong. It’s not a game that’s meant to be played at full speed, holding movement keys for long periods of time. Interestingly, the SUPERHOT team only realised the extent of the issues until after they’d implemented it, Iwanicki finishing by saying “We had it done and then we completely removed it because it wasn’t a focus of the game.”

The title of the talk was Game Design And Mind Control, referring both to the weird viral marketing that was so vital in SUPERHOT’s route to success, and a big part of the narrative itself, for which there will be spoilers if you haven’t finished it yet. Iwanicki explains how they started this with the game-within-a-game structure: 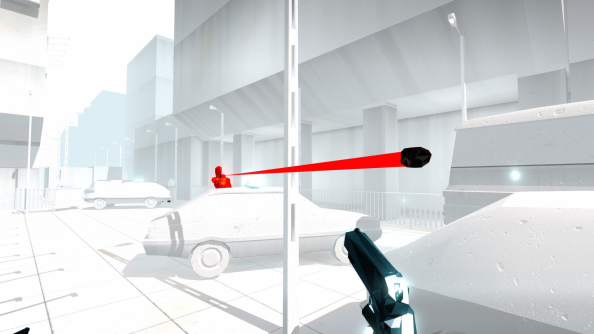 “This strange game quickly changes into this mind control that’s driving your experience, like a game that doesn’t treat you well, it calls you a ‘good dog’ for following orders, things like that. Our reference for that was a cult, an abusive relationship or a drug. It’s totally against reason. There’s this game that gives you this gleeful, in control experience, but there’s also this force behind it that just wants you to hook up to it.”

Iwanicki and co got these ideas from some of the most popular games in the world: “Games do this a lot. Like idle games,” he says over the projector showing Clicker Heroes. “I love idle games, I love to play them, right? But it’s also, you know the feeling of playing this game, it’s often like this mindless feeling of just clicking things. It’s fascinating – imagine like an evil sect, a religious thing, using idle games as a form of everyday prayer. This is a thing like that.

“So we took those things that these games are doing: remember to play,” he flashes up an image of turning on push notificactions for game apps, pointing out that all these sound much worse in an evil russian voice, which he dutifully provides. “Tell others about the game, stay in the system, bring your friends to us.” All these combined with their own examples from the mobile and free to play spheres. 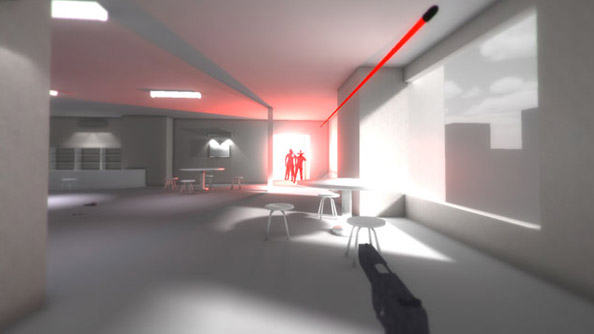 “So the thing about the story in Superhot is we don’t feel like we invented anything, we’re just doing what all the games are doing, we turned that into the theme. And while all those tricks are the theme of Superhot, it allows us to use them.” He says with a laugh.

This is in reference to Killstagram, the replay site that produces easily watchable and sharable footage of the game. Plus the finale of the game giving you a special message to post across social media, and keys for discounts to give to friends, tied to the same words of encouragement you originally read from characters in-game introducing it to one-another.

A combo of smart marketing and good writing in, bit of a non-shocker, one of the most popular games of the year so far, but it’s interesting to see how they approached it. Even the smallest details in the game were thought out, pulled from odd sources – another example was brought up by an audience member, asking why at the end of each level you’re forced to throw your gun away.

“Our reference for that was it should feel a bit like ‘Bang, bang, bang – mic drop.’”