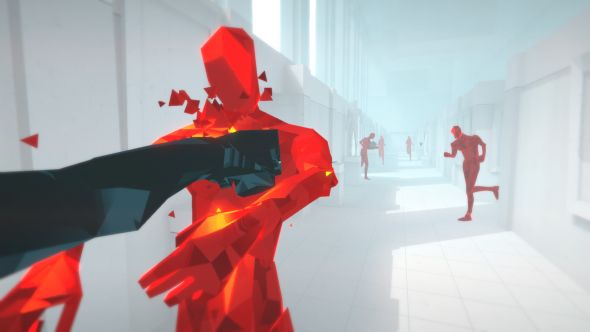 Update April 28, 2017: The Superhot team and ModDB have announced the three top entries in their Make it Superhot design competition. The winner has bagged a $50,000 publishing contract, while the runners-up have scored a smaller cash sum and some gaming hardware.

Superhot’s time-bending genius earns it a place on our list of the best indie games on PC.

In third place isKamilWdowczyk’s Superhot 8bit, which reimagines Superhot in retro style, transferring its staccato choreography into a top-down perspective. In second is Tero Piipponen’sÜberHot, a Hotline Miami-alike with time manipulation. This one looks like a lot of fun. And lastly, in first place isLyallCampbell’s Peer-2-Pizza , a mod about delivering pizzas directly through a computer. Honestly.

Follow those links to check out some gameplay from each of the top three mods.

Original Story January 18, 2017:The Superhot dev team and ModDB, a leading mods database, have partnered to host a game design and art competition with some pretty incredible prizes. On offer are cash prizes up to $5,000, a GTX 1080, an Oculus Rift, and most impressive of all, a publishing contract worth $50,000. If you make stuff for games on any scale, read on for details.

The contest opened yesterday, January 17, and runs until February 26, so you’ve got 39 days from now. It’s split into two categories: Games & Mods, and Arts & Crafts. The categories are pretty self-explanatory, with the former offering the biggest prizes. The special prize – a $50,000 publishing contract with IMGN.Pro – is also only available to those who submit a game or a mod. IMGN.Pro’s publishing credits include Expeditions: Vikings, Seven: The Days Long Gone, and Superhot itself.

The main stipulation in both categories is that your entry should take inspiration from Superhot, “whether it be from the art, gameplay, style, maps, storyline or even the UI”, says the blurb. “What Superhot-inspired creation you make is entirely up to you – make a standalone game, a mod for your favourite game, or perhaps you’d prefer to show us your awesome artwork.”

If you’d like to enter, all you have to do on a technical level is upload your content to ModDB and tag it with #MAKEITSUPERHOT. For more details on judging and prizes, head over to the website. If you’re not familiar with your source material, check out Superhot on Steam.

Very best of luck if you’re planning on entering. Tell us about your submission in the comments!