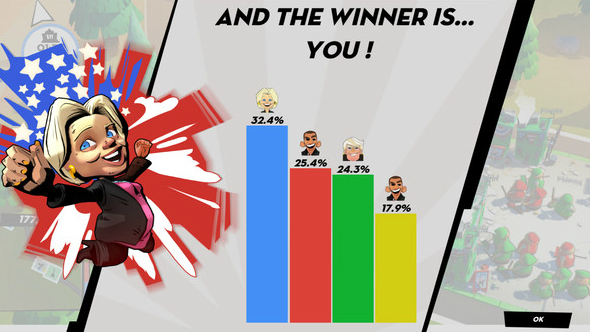 Gaming is a relatively new medium, and as such people are having a lot of fun trying to meld recent topics and gameplay together into something that resembles satire – but unlike time-honoured political cartoons, also serves an entirely separate entertainment purpose. That goes some way towards explaining the bulk of what you’ll find in Steam’s ‘Political’ category, which in recent weeks has become bloated with games about the upcoming US election. You know, the one that potentially spells the death of the free world as well as the collective hopes and dreams of everyone alive today, depending on who you ask.

If it’s a specific candidate you have in mind, why not check out the best Trump games on PC.

From hardened indie devs looking to poke fun at key figures to developers you’ve never heard of taking it upon themselves to put the world to rights, everyone wants in on the 2016 US election. So for better, and indeed for worse, here are some really silly US election games to help you forget that this actually proper serious, yeah? 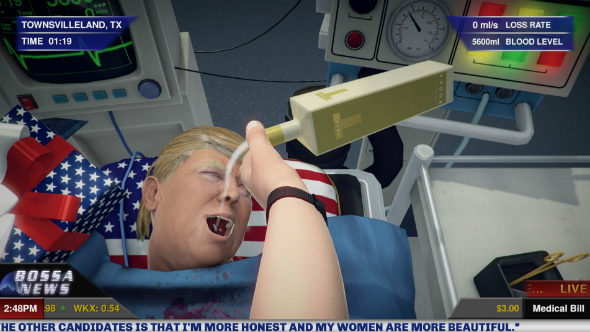 This free slice of DLC for Surgeon Simulator 2013 lets you decide whether to give Trump a heart of gold, or one made of stone. Of course that decision is complicated by the fact that to do either you’ll actually have to replace his heart yourself using the game’s famously tricky controls. You’ll also have some new medical equipment to try out on Trump, like a bottle of his self-branded vodka that you can pour down his unknowing gullet, and a statue of Trump Towers, which you can use to bash through his ribcage.

The Inside Donald Trump DLC isn’t all abuse and torture though: not only can give you the guy a shiny gold heart, you can also prove that he doesn’t wear a toupee by slapping his fringe about a bit. 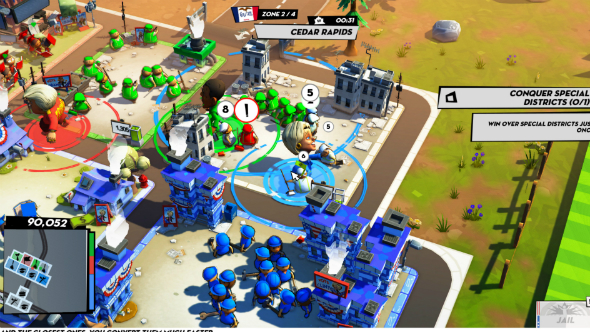 Here’s a game that gets right down to the root of politics. In megalo Polis, who shouts, throws the most money around and has the most visibility wins – a motto the SAS probably won’t be adopting anytime soon. Straddling a curious line between clicker and RTS, Megalo Polis has you select a candidate – Hillary, Obama and Trump are your choices – then attempt to run through the streets of various towns and cities hoping to onboard as many people to your campaign as possible before moving on.

Winning votes is as easy as parking your avatar in a district and waiting a set amount of time for everyone there to join your side, which often means chasing outliers for that last key vote. That’s probably a poignant statement or whatever. Certain groups of people will be harder to convince depending on who you’re playing as, for example teachers go weak at the knees for Hillary but construction workers are much harder to sway, which is sort of horrendously offensive when Trump rolls through chucking money in the air and they all lap it up. 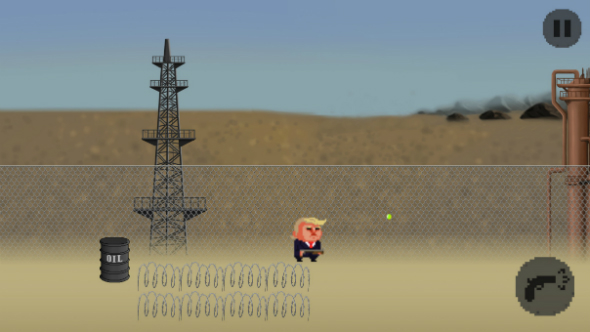 I honestly can’t comment on the quality of this game because I never made it past the first obstacle. Seriously, the above image is of the first obstacle, and after 15 actual human minutes that’s as far as I got. Does that make this the Dark Souls of US election games? 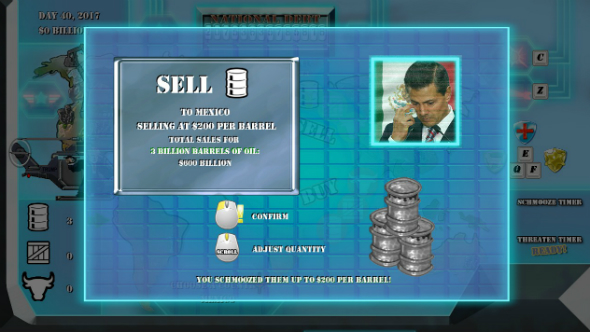 Because presumably these developers were beaten to that particular title but didn’t want to compromise on their artistic vision. Maverick Game Studio don’t play by the rules, but they get the job done – the job in this case being a bizarre mashup of resource management and side-scrolling shooting mechanics that they assert represent what will happen if Trump wins the US election. Expect to build a wall and make Mexico pay for it, take on ISIS and buy and sell oil all around the world. During my playthrough I did all of these things and started World War Three, which I assume means I won. 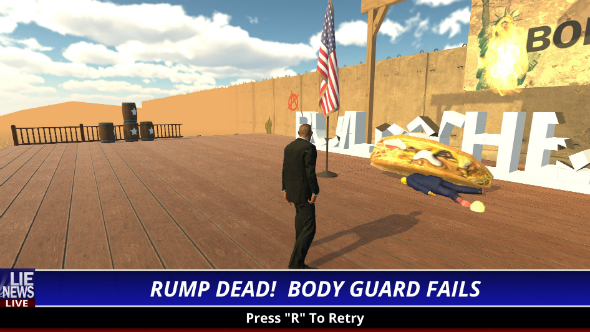 Elections mean campaigning, and campaigning means assassination attempts. Mr. President! aims to capture the horror and tragedy of these situations by placing the player in the shoes of a bodyguard tasked with keeping Ronald Rump safe from 50 assassination threats.

The bulk of gameplay involves avoiding anything that might trigger the game’s incredibly sensitive ragdoll physics and throwing your body in front of bullets. The game throws an extra dose of challenge your way by giving you no indication of when exactly the shot is coming, which means the best way to save Rump is to just stand in front of him and wait to get shot. The crowd will cheer and clap regardless of what happens. Especially these guys. 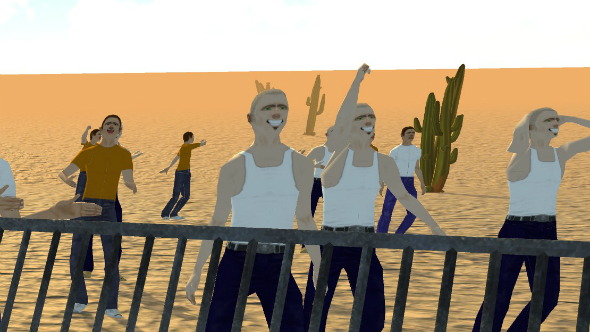 I stopped playing after getting stuck on a level where Trump is threatened by two giant tacos falling from the sky. Make of that what you will. 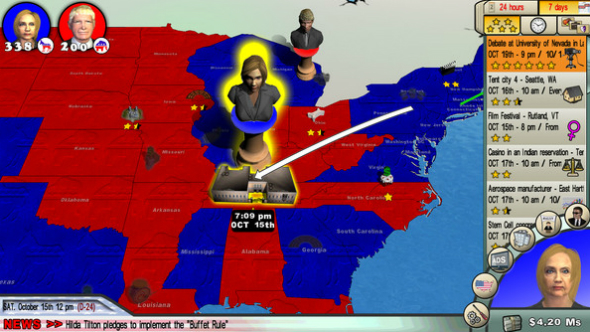 When 3D animated faces are a highlighted feature you know you’re in for a treat. The Race for the White House 2016 lets you enter the political fray as either Hilda Tilton or Ronald Drump – the other political parties are all represented but are hidden away under the ‘other’ tag. The aim of the game is to travel all around the US, saying the right things to the right people in order to politically convert as many states to your side as possible.

One feature that definitely should be highlighted is the voiceover work. During your campaign run, you’ll have to go on TV, visit landmarks and key states, and host rallies, choosing something to speak about each time – every option you pick is fully scripted and voiced, which is complimented by the eerie 3D animated faces of Hilda and Ronald. It looks something like this… 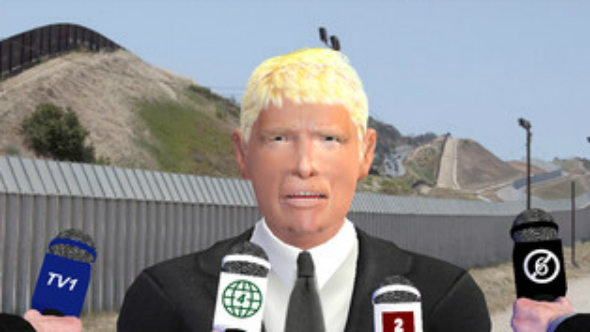 Sizzling political satire this most certainly is not. Leaping onto the bandwagon at the very last moment, this launch day add-on features three incredibly pointless game modes that all equate to turning in-game pedestrians into either Hillary Clinton or Donald Trump. That’s literally it. If you feel that the U.S. Election Nightmare Special Edition is overselling itself, that’s because it is.

What do you make of these titles? Let us know in the comments below.