What’s amazing about Survarium, even as a fraction of the game it should one day become, is how much its simple team deathmatches still feel like STALKER.

Which is a relief, because Survarium has an incredibly unpromising and free-to-play wrapper. It seemed like a perfect recipe for frustration. But it turns out that Survarium, even at its most hobbled and restricted, started to win me over almost instantly.

Right at the start, Survarium lets you know that there is a hell of a lot of grinding between you and even the most basic kind of combat loadout… and that spending money on premium currency can speed you down the runway to better gear and a better character. But either way, you can look forward to a lot of matches where you’re running around in sweater and a cargo pants using weapons that were outdated even before World War 2 ended.

I felt myself getting depressed in the main menu. STALKER is a game that I have a deep attachment to. For me it’s probably the most important shooter after the original Half-Life, and the scene of many of my happiest and most vivid gaming memories. To see Survarium’s free-to-play trappings, with the constant reminders of progression gates and invitations to spend money on premium currency, was like discovering a monster is wearing a friend’s skin. This was no STALKER follow-up.

But then, in my very first game, I spawned into a cold, misty drizzle on some desolate steppe, in the ruins of an abandoned farming village. A massive furrow had been torn across the earth, a long gash twenty or thirty meters deep, filled with clinging fog and aglow with uncanny energy. A lonely, dilapidated Orthodox chapel sat on a small mesa above it. In the fields all around, small groups of poorly-armed paramilitaries spread out amidst the sagging buildings and rusted-out farm equipment. Single, sullen rifle shots banged from every direction, while occasionally a serious firefight flared-up and the furious stitching of PPS submachine guns rent the air. It was an instant reminder that the old STALKER team, many of whom now work on Survarium as a part of Vostok Games, did better than just about anyone was atmosphere. It felt like a homecoming. 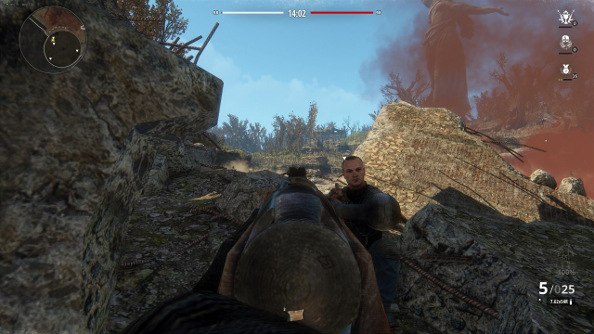 It was a homecoming to a different kind of game, but still a good one. Survarium still has the level design and rhythms of a STALKER game. Its closest multiplayer kin is probably Red Orchestra 2, which will probably chase some people off just as surely as it will entice others. The large maps allow for a lot of long-range sniping, which means a big part of the game is just scrutinizing seemingly empty landscapes and trying to figure out if it’s safe to move out. It’s less about reflexes and more about patience and positioning.

That’s not to say it’s a giant campfest. The maps allow for a variety of playstyles. They’re also spectacular and memorable locations in their own right. The Vostok Radar station is a particular high-note, where a massive radar installation in the center of the map has an enormous tree branch wrapping around it, providing an alternate route to the top of the dish from which snipers can rain down havoc… assuming they can stay alive up there, since it’s a bullet-magnet and a constant battleground for both sides. But down below, the facility itself is a confined death-trap, with short-circuiting electronics ready to zap you to death at a moment’s notice, and point-blank engagements in the room-to-room fighting.

Then there’s Mamayev Kurgan, where the Stalingrad memorial lies in ruins amidst the detritus of a fresh battlefield, while “The Motherland Calls” statue towers above. Abandoned tanks dot a sandy field while long, shallow ditches and tunnels break up the landscape. Snipers threaten anything that moves on the surface, but the warren of tunnels creates lots of stealthy attack lanes and choke points where grenades and automatic weapons reign supreme. The memorial complex, with its collapsed roof and shattered Eternal Flame monument, provides good fields of fire and a backdoor path to each team’s spawn zones, which turns it into the scene of pitched battles as players try and wrest control of it.

The weather changes within maps. Sometimes it’s sunset, sometimes it’s a rainy day, sometimes it’s a beautiful summer afternoon. What’s impressive is just how thoroughly the different conditions affect how you play. The direction of the sunlight is a massive tactical consideration. A gray twilight creates pools of shadow that are perfect for for concealment, or a thin haze gives people a chance to move across open ground. Trying to spot enemies when you’re looking into the sun is near impossible, turning the sun’s bright, welcoming rays into yet another environmental threat. It all reminds you that this is a STALKER descendant, and that lighting and weather aren’t just for setting the mood. 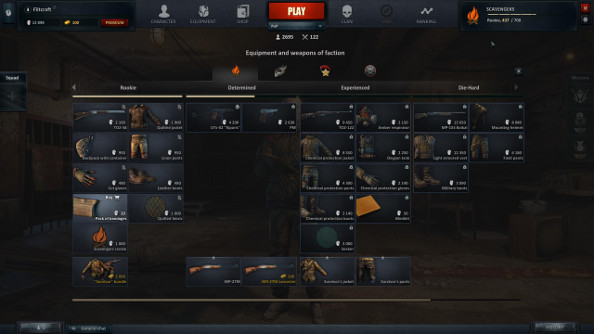 The slow pace of progression and unlocks can be a drag, especially when you are bumped up a matchmaking tier and find yourself in games with much more heavily-armed and armored players. I’ve played a lot of games and I’m still running around with a basic Moisin-Nagant bolt-action rifle, with very basic armor and equipment. Leveling my character has enabled me to sprint marginally longer, and aim imperceptibly faster. But I’m still a long way away from the kind of gear I want.

There are, of course, premium weapons. A lot of premium weapons. They don’t seem like they confer any huge advantages, and you do have to progress to the right experience level to use them, but an awful lot of the multiplayer variety is effectively behind a paywall. I also can’t quite shake the feeling that the premium weapons stats all make them marginally more effective. Not so much that you’d notice in a game, but a lot of their values are just slightly higher than those of their free-to-play counterparts. It’s a nagging fear. Did you lose that point-blank “spray-and-pray” shootout because you were unlucky or less skilled, or did you just have the cheaper gun?

Then there’s the fact that you have to pick a faction, which lets you unlock the items associated with that faction. It’s a secondary progression system that effectively creates four different progress trees you have to unlock if you want to have anywhere near the full slate of options from SMGs, to sniper rifles, to assault rifles. Plus, every faction gets its own armor. If I get bored with being a sniper, I have a LOT of grinding to do if I want to open up decent assault rifle options for an intermediate or high level character.

Fortunately, that grind isn’t so bad because I find the core game intrinsically rewarding. I’m not playing games so I can get closer to an AK-47. I’m playing them because I love the pacing and tension of a Survarium match. As the other game modes are activated (I was never able to get matched into Survarium’s versions of CTF or domination), it should get even better. 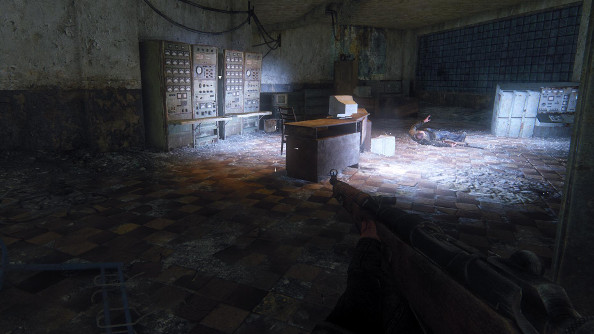 It’s also worth nothing that the maps themselves will be very different depending on the gear you take. For instance, the radar station has a key flanking route that’s blocked by a toxic miasma that lower-level players cannot survive, so they are funneled back into the scrum in the middle. But with right protective gear, there’s an entirely different way of playing the map. The same holds true of just about all of Survarium’s post-apocalyptic locations.

Survarium still has a ways to go, even as a pure deathmatch shooter. Server problems have been a constant companion of my time with the game. From time to time, they start kicking players before matches end, so nobody gets any experience. I’ve also had a lot of disconnects and lag spikes, but those mostly happen when those server problems are about to raise their ugly head.

As a STALKER fan, Survarium isn’t yet the game I want. It’s a good multiplayer shooter for people who like more deliberately-paced games. But it’s tantalizing because each location hints at what kind of world you might be able to explore, if you weren’t trapped in a deathmatch. Those elements — the monsters, the missions, the giant maps — have yet to arrive. But playing what Vostok have done so far, I’m starting to think that STALKER may yet have a worthy successor. Just like the old games did, it still feels unlike any other shooter around. So for now, I’m at least enjoying my time in the trenches of multiplayer warfare.