Psst. Did anyone follow you here? You sure? Good. After events like the Cambridge Analytica scandal, the whistleblowing of Edward Snowden, and the impending digital takeover of Facebook and Google, it’s slowly becoming clear that maybe we ought to be more aware of our personal data and privacy – how much we willingly share, and who we share it with. Even the most recent meme sensation, the ‘ten year challenge’, is starting to look like the ideal data harvesting tool for a face recognition algorithm Facebook are working on.

This age of surveillance has already made its way into videogames, technological privacy becoming a launch pad for puzzle games and thrillers. A Normal Lost Phone has you delving into the emotionally fraught depths of a teenager’s mobile. The entire Watch Dogs series is predicated on the idea that cities are covered in eyes, ripe for hacking and misuse.

Privacy breaches go further than simply browsing a stranger’s personal information – there’s an institutional level of surveillance coming to light, and videogames are telling us why we should care.

“Games can be a great tool to convey how certain dynamics work in real life,” Osmotic Studios’ Daniel Marx explains. “Putting players into roles they normally don’t fill or giving them abilities they normally don’t have can get players to reflect and find their own stance towards issues in their lives.” 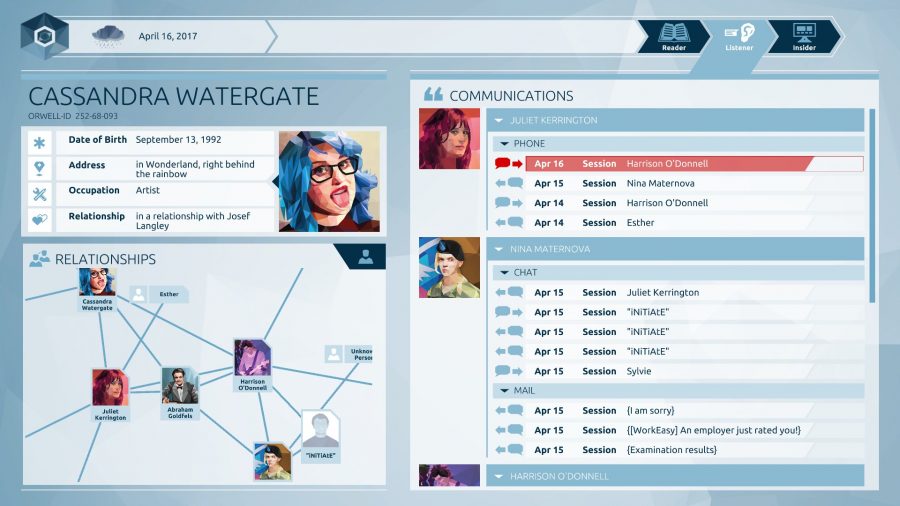 Marx is the creative director behind the dystopian Orwell series, which has players slip into the digital shoes of a government surveillance worker. Your job is to follow the interconnected threads of the internet and collect data on individuals – from personal email addresses and social media accounts, to places of work, home addresses, and bank details. The computer UI that the player operates echoes the PRISM surveillance system unveiled in the Snowden revelations.

The excuse that if you’ve done nothing wrong, you’ve got nothing to fear, doesn’t hold up

But Orwell isn’t just a collection tool – you make decisions throughout the game about how to use that data. “We took most of our inspiration from two aspects: total surveillance and the redefinition of truth and facts,” Marx says. “While we implement the former with a system that can observe the entire web and digital communication, we also address the latter by only viewing points of data and interpreting them out of context – without a look at the whole – taking them as correct even if they’re not based on any factual evidence.” Using this data harvesting technique, you have the ability to twist the information you gather, turning a group of civilian protesters into a dangerous hate group.

Osmotic Studios has created its own analogues of Facebook and Twitter, and the amount of personal information I gathered through just those two websites made me think about all the information I had willingly given out online. 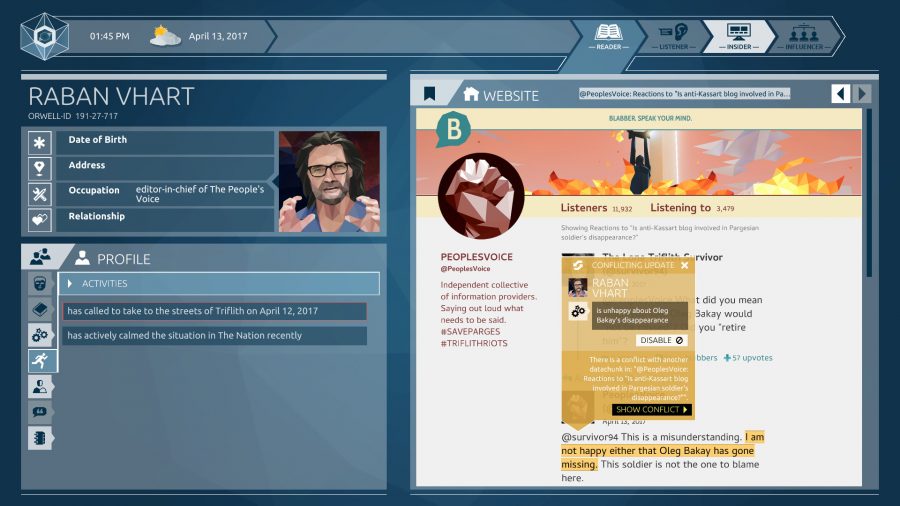 “If players are in for more than just entertainment, they should ideally make up their minds on the topics of surveillance and the power of data and information in today’s society,” Marx says. “The excuse that if you’ve done nothing wrong, you’ve got nothing to fear, doesn’t hold up. Every piece of data on you can be used against you in some way in the wrong hands.”

Keeping AI on you

Not only are Google harvesting all your personal information, they’ve also programmed a computer to beat you at video games too. DeepMind have built an AI program named AlphaStar with one purpose: mastering Starcraft II's competitive multiplayer.

In Orwell, those hands are yours. You can hide behind a screen slowly collecting snippets of data from various areas of the web – and tellingly, the tool you use even looks like a spider’s web, a collection of all the individuals you have profiled.

“It’s crucial to hand players power so their actions could have tangible consequences in the game’s world,” Marx says, “prompting them to make up their minds on the topic and questioning their own stance towards it, hopefully getting affected by what they choose in the process.”

Choice in these games is vital if the player is to to make the connection between the game’s message and their own personal experiences. It’s an idea that developer Tanya Kan shares with Marx, and runs through her own dystopian surveillance game, Solace State.

Where Orwell tell its story from the position of a government employee, Solace State takes its message from the real lives and experiences of everyday people and their communities. “It’s got the ability to revolutionise perspective.” Kan says. 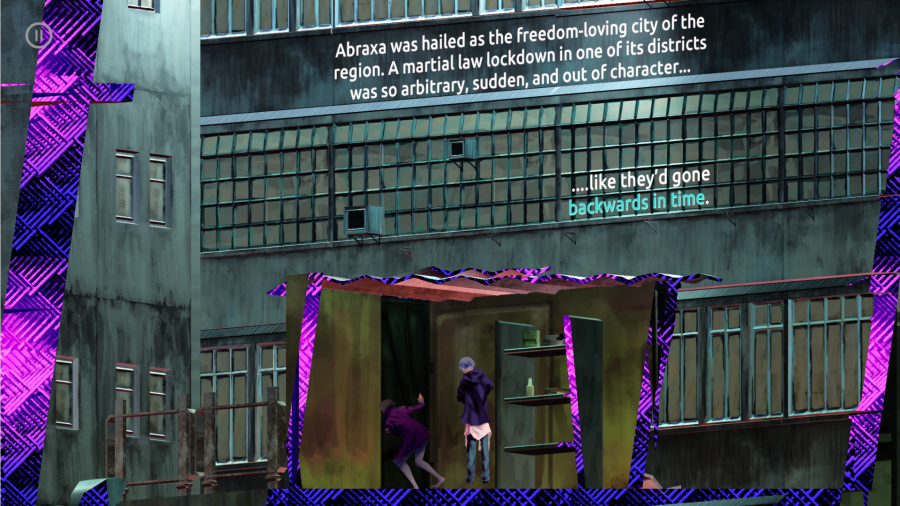 This dystopian visual novel follows a young hacker called Chloe as she tries to find her missing friend in a city under intense surveillance. “You start off the game and realise there are so many different kinds of lines and borders that have been placed between you and reaching your friend,” Kan says. “Those borders can be actual physical borders, virtual borders, or censorship. You want to find your friend, but within that you realise the suffering goes beyond just you.”

Solace State’s borders are visualised as the walls of a city, and as you progress through the story the metropolis unfolds before your eyes. The words of the visual novel are painted across the alleyways and advertising boards like graffiti. “There’s a sense that you might not know everything all at once,” Kan says. “You might just see a building facade. But as the main character hacks, she’s literally peeling back the walls of the city.”

As the main character hacks, she's literally peeling back the walls of the city

Solace State gives the power to a character who isn’t in a position of authority. Chloe uses her hacking against institutional systems, using its own tools against itself. Hacking and encryption in Solace State, and in real life, allow people and communities to regain the technological control they have lost.

Kan researched youth protest culture in South America and spoke to students in East Asia about their movements, who they represent, and what their hopes and fears are. “We really wanted to access a storyline that would empower normal people,” Kan explains. “They might not necessarily be hackers, but they’re definitely talking on a level of digital familiarity that is much more obvious than the previous generation.” 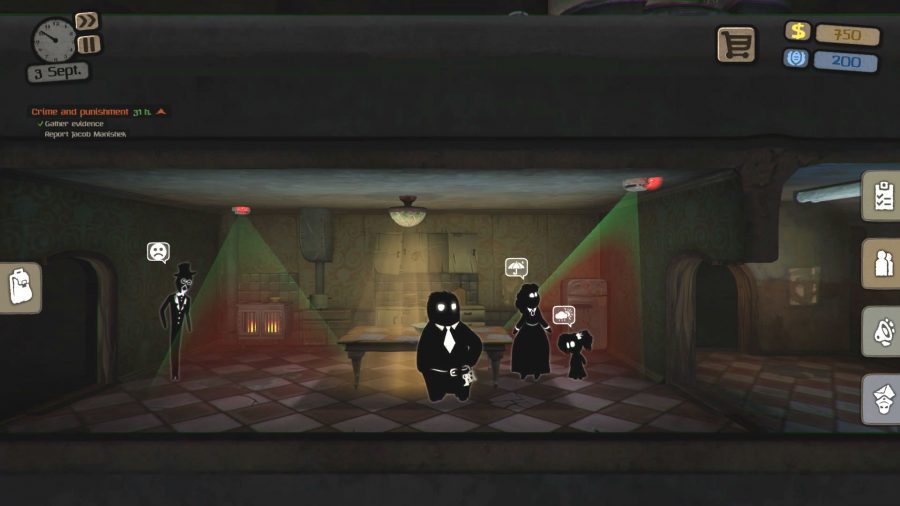 In contrast to this hopeful message of personal empowerment, the Beholder series by Warm Lamp Games takes the topic of surveillance and heightens it via a dark and bleak world that’s gripped by a totalitarian state. There’s the towering image of the government building in Beholder 2, and the looming apartment block in Beholder, emphasising state control. All the characters’ features have been reduced to a minimum, until they’re merely colourless blobs.

“On the one hand, the art style adds value to the setting. There is no place for a person in a totalitarian state,” Warm Lamp Games’ Evgeny Kapustin tells me. “All you can see is impersonal crowds of citizens. A totalitarian state is a place where freedom of speech is oppressed, and therefore the characters have no mouth.”

The Beholder series presents an exaggerated vision of a totalitarian state under mass surveillance, but it functions as an cautionary tale. “We are telling a story that happened long time ago, is happening now, and will happen again in the future,” Kapustin explains. “We put no effort into depicting events from the real world, but somehow those events are now much closer than they were back in November 2016, when we released the original Beholder. The game hasn’t changed much, but the world seems to have set a course for collision.”

Read more: Check our our list of the best indie games on PC

Navigating origami cities, collecting information for data webs, and spying on citizens without getting caught is fun. That’s what games are all about. But these games also make us reflect on how complicit and willing we are in giving our personal information away – for uses we’re not privy to, and to ends we might not like to imagine.