There’d be few who would deny that Star Wars: The Old Republic has had a rough, rough time,and when the game’s creative director, James Ohlen, spoke at GDC, he was frank about many of the problems that the game ran into. Still, he insists that the switch to free-to-play has completely turned the game around and, if the game’s player base keeps rising, “Next year, at GDC, we’ll be able to claim six, seven or even eight million players, if we continue at the rate we’re going right now.”

Looking back over 2012, he painted a picture of a year of ups and downs. SWTOR enjoyed a tremendous launch at the end of 2011, selling over 1.5m copies in its first month (“It was the fastest selling MMORPG in history,” Ohlen pointed out) and, most importantly, proved to be incredibly stable. “That’s something we’re particularly proud of,” Ohlen said, “because we had so many players coming into the game at the same time. We had millions of players jumping into the servers and the servers stayed up.”

Morale was high as January began, especially after a five years of difficult development. The engine that Bioware were using was unproven and Ohlen explained that developing both the game’s features and content at the same time was something that one team member likened to “Changing out the engine of an airplane while in the middle of a flight.” The sheer size of the project also demanded a team of unprecedented size, something that presented further problems in organization and efficiency. “There’s no game engine out there that’s built to support that many developers working on it simultaneously,” Ohlen said. Still, a five year development period was to be expected, he insists. “People said the game took way too long to build, but the fact of the matter is MMORPGs take half a decade to build these days.” 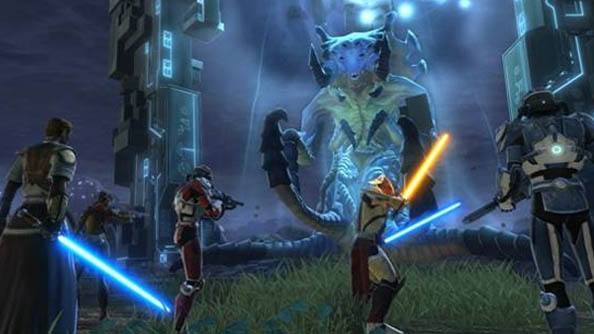 But after players began exhausting the game’s content much faster than was expected, and consequently deserting the game, SWTOR suffered through the spring and Bioware had some very bad news: “We announced in May that we were down to 1.3m subscribers, we also had to start going through a series of layoffs, which had a devastating effect on morale.” The summer was a low point for the studio as the team laid off “hundreds of our friends,” watched Guild Wars 2 receive rave reviews and believed Mists of Pandaria “was going to kick us in the crotch.” They needed a filip, an incentive.

“We really felt that launching our free-to-play option was the biggest opportunity to turn things around,” Ohlen said. “The free to play option’s like the ultimate trial: You hear about SWTOR, you hear that, yeah, you can play it without having to spend $50 on a boxed copy or give over your credit card information, you can just download it and play.” The introduction of the collectible Cartel Packs also proved an enormous success, providing microtransaction system that Ohlen said really rewarded players. 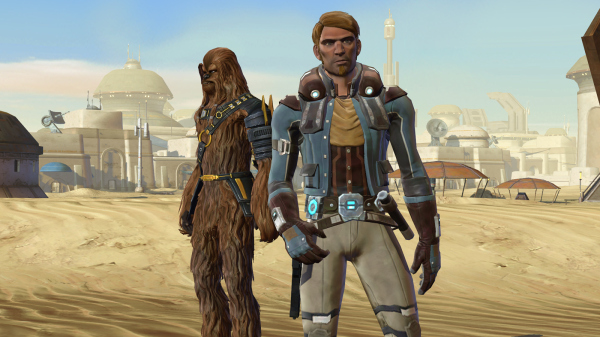 “We took everything that was popular about collectible card games and applied it to our packs,” he explained. “That sense of discovery that you have in CCGs of opening up the card pack and discovering whether you got the item you were looking for.” If any of the items in your latest Cartel Pack didn’t appeal, you could always auction them off to other players and, at the same time, see what everyone else was offering. Some players spent hundreds of dollars on the packs, though they weren’t obliged to buy any if they could find what they were after by browsing the auction house. The market is now one of the biggest real-money trading hubs that EA has in any of its games.

“We have a player-base that’s much more satisfied with what they see, a community that’s a lot more positive,” Ohlen said, adding that Bioware have gained experience from all this too, having built an MMO and seen it at its highest and lowest points, while shaping “a game development team that is smaller, but is a lot more agile.” He says that Bioware are optimistic about the forthcoming expansion, Rise of the Hutt Cartel, as well as other content that they plan to introduce. 2012 was a year of highs and lows, but “it’s good times right now.”