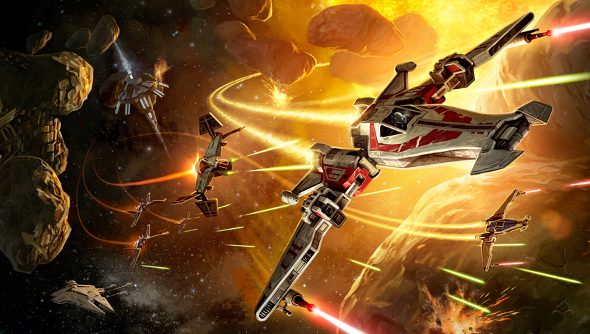 Star Wars: The Old Republic subscribers can now bugger off into space and shoot each other’s ships as the latest expansion, Galactic Starfighter, goes live. Starfighters can flit around the black expanse of space, getting into dogfights in 12v12 PvP battles, after selecting one of three classes (scout, gunship, strike fighter).

Pilots can add a personal touch to their ships, whether that’s a new paint job (hot pink or no deal) or altering the colour and sound of the blasters, or more practical alterations like switching engines or weapons, changing the shape of the vessel.

Subscriber Early Access comes with two battle areas, one game mode, and 14 ships to choose from. Come February, when it launches properly, the bomber role will be added, 10 more ships can be yours, and a dynamic flashpoint will be implemented.

It all sounds like a bit of a lark, and infinitely more interesting than The Old Republic’s standard PvP, which is was pretty terrible when last I explored it.