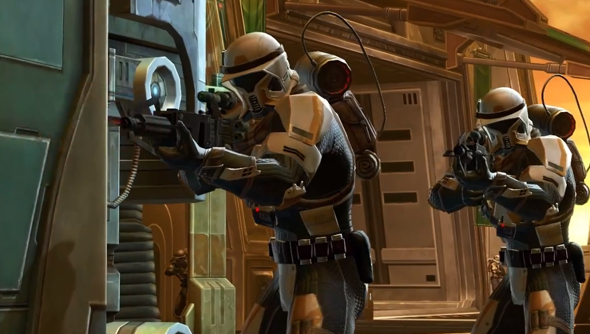 Star Wars: The Old Republic will be going Free to Play this Autumn, EA have announced. Where previously characters were only free to play up to level 15, all eight class storylines are to be made available up to level 50, albeit with limited access to particular features.

Free players will be limited in the number of Warzones, Flashpoints and Space Missions they can play per week, and won’t have access to Operations. Other restrictions will be placed on species choice and travel features.

A new virtual currency is to be introduced – Cartel Coins – in exchange for which some of these restrictions can be lifted. Unlimited access, including new higher-level content and priority login queues, will only be available to subscribers. Cartel Coins can also be used to buy in-game items including “customisable gear and convenience features”.

“Players want flexibility and choice. The subscription-only model presented a major barrier for a lot of people who wanted to become part of The Old Republic™ universe,” said Matthew Bromberg, GM of BioWare Austin, in a press statement tonight.

Executive producer Jeff Hickman added: “Since launch, we’ve been listening to feedback from our fans and adding new content and refining The Old Republic at a breakneck pace.

“We believe we are in a position to help improve the service even more, not only by continuing to add new content, but also by expanding the game to many more Star Wars fans, increasing the populations on worlds and the vibrancy of the community.”

Subscription play will continue to be available through ongoing payments, as well as through the purchase of Game Time Cards. All subscribers will receive monthly grants of Cartel Coins.

Afull list of the feature split between free and subscription players can be found here on the official SWTOR site. BioWare will be increasing the frequency of game content updates in the coming months, beginning with a new release in August. Look here for more details on rewards offered for current and past players.