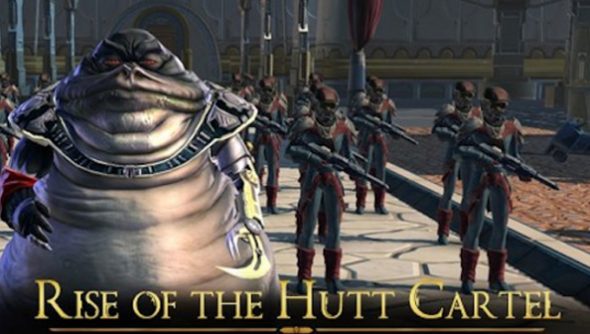 Rise of the Hutt Cartel is a full-blown digital expansion for SWTOR. It will increase the level cap up to 55 and introduce five levels-worth of story-driven missions on a new planet, courtesy of the titular slimy gangsters.

It’ll cost $19.99 for free players and $9.99 for subscribers. Both will get five days of early access for pre-ordering before January 7th. It’s worth noting, too, that pre-ordering will automatically bring free player Preferred status, with all the convenience benefits that brings.

You can pre-order here. If you’d like to find out what you’re buying first, though, read on.

The Cartel are a new force in the galaxy, dead-set on knocking both the Republic and Empire off their respective perches. They’ll be waiting on new planet Makeb with “massive new creatures” and “never-before-seen Droids”, which I’m choosing to conflate as ‘massive new Droids’.

As players uncover the “diabolical” plot of the Hutt they’ll need to pick a side for the new story missions, which will be fully-voice as per SWTOR’s usual high standards.

The whole shebang will be sprinkled with new weapons, armour and abilities.

What will an expansion mean for SWTOR? It’ll mean it’s no longer strictly free-to-play, for starters, introducing asignificant financial hurdle between free players and the game. Either they’ll cough up, or be left behind.Most importantly from its developers’ perspective, Rise of the Hutt Cartel is a reason for subscribers to stick around – and subscribers are still the apples of BioWare’s eye.

What about you? Are you returning subscriber, intrigued free-to-player or walk-on-byer?