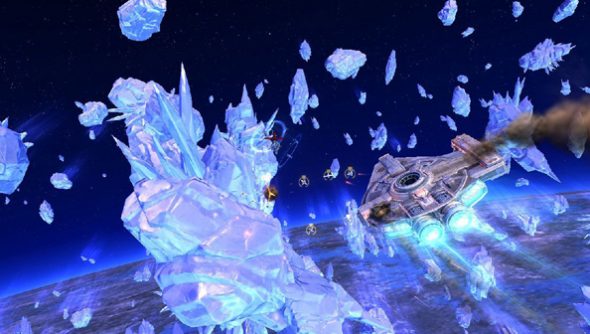 I think I might form an electropop band called Ancient Hypergate over Christmas. We’ll release two EPs and pack it in before New Year, bar a 2042 sell-out tour of northern England’s Labour clubs. There in the future we’ll sip tepid cokes and recount, with no small amusement, the fact that we were named after a series of Heroic Space Missions and a new PvP Warzone in SWTOR 1.6.

The Warzone features a new PvP set-up. Republic and Imperial forces will bicker over two objective points – volatile energy pylons. Control the pylons or kill enemies to discharge energy into your faction’s portal. When one side’s portal opens, reinforcements flood in and the battle is won.

The new repeatable Level 50+ Heroic Mode Missions are designed to “challenge even the most skilled pilots”. There are six per faction, and rewards will include high level gear and Black Hole Commendations to exchange for ship upgrades.

This is one of those six-weekly major updates BioWare committed themselves to, designed to serve subscribers rather than free-to-play newcomers. How well do you think BioWare are dealing with their newly split focus?