“It has always been a fight for me to prove that I was serious about what I was doing,” says OlivierJT, Parisian indie and self-appointed VR ambassador. “That I was dedicated and that I really wanted to go to the finish with this.

Olivier is certainly serious enough to subsist on pasta and rice while designing a game for VR input that doesn’t exist yet. And dedicated enough to build an entire mythology around a volcanic civilization he intends to be at the centre of a series of genre-spanning games.

“I’m really throwing everything I have at this,” he goes on. “I say, with a certain fear, VR or die. I really hope I survive all this.”

Olivier is working on a first-person episodic VR game named Maze – and around it, a fiction he calls Synthesis Universe. The people at the centre of this fiction have evolved from a fire-spewing mountain, and channeled its power for their industrious ends.

“As we are born from water and carbon, these guys are from lava and heat. There’s a whole story,” he says, and acknowledges: “It’s pretty nuts, in some ways.”

Olivier works alone, and intends to grow his Universe over a period of years – hoarding and reusing assets between projects.

“Many game developers create one-shots,” he says. “When they want to make another game they trash everything pretty much. I want to keep everything I can. That’s why I created story and lore and a chronology for them.”

Once the Oculus Rift began to take off, Olivier saw the perfect platform for his new world.

“I’m from the generation that missed VR in the ‘90s,” he explains. “I had a place that I wanted people to visit, so it was a no-brainer for me.”

This was 2013, and the growing pains of VR imposed fast limits on what the first Synthesis Universe game could be. At the time, Oculus didn’t support head rotation – and Olivier “couldn’t really wait”.

“I decided to do a game that was going to be flat,” he says. “And that was where I had the idea to design a maze game.”

Maze, the game Olivier is working on today, is set in a five-cornered penta-pyramid – a 1.6 kilometre-long living monolith powered by streams of boiling magma. In the Unreal Engine 4 editor, Olivier has placed a model of the Eiffel tower next to the pyramid for reference. It is but a mouse to an elephant.

Fortunately, the penta-mid is divided into five segments – each a maze of a different type for the player to navigate. Olivier’s first episode will cover just two, and ask players to reach and open a shell – a sort of mechanical faberge egg containing a “surprise”.

“If you play a maze game on the computer, you use your memory,” says Olivier. “But in VR, immediately you use your real sense of orientation. It makes things really, really interesting.” 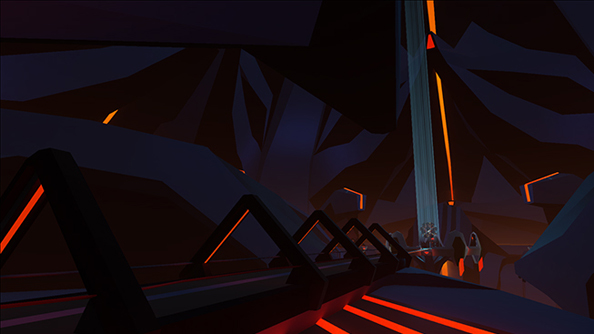 Synthesis Universe is a “musical universe”, and here staccato electronica is your guide. A track will play to indicate the ideal route through the maze. Wander from the path, and the music will get noticeably glitchier – a hint as to the direction you ought to be heading in.

The music will evolve with the player’s progress. As you’re joined by AI drones also traversing the maze, new beats and instruments will be added to the arrangement.

On top of this, a mysterious but well-intentioned girl complicates exploration – emitting a tune for the player to follow.

“You have to notice her,” says Olivier. “That’s why 3D audio is very important. Sometimes you can look around and not see anything – but then you hear her in the distance, and you’re able to track her and figure out the maze.”

And a second girl sings her own song – but with the aim of leading you down the wrong passages. The problem is, you won’t know which is which.

“I want people to get lost,” laughs Olivier – but the developer will grant the girls the ability to open up temporary paths to save struggling players. 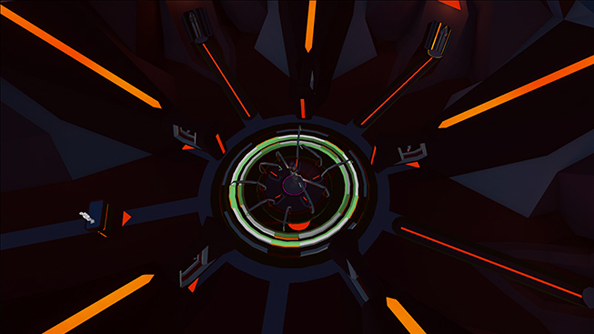 That’s the first half of the game. The second is still in-progress, and will require the player to use their hands to complete puzzle and action sequences.

“We’ve been playing with mouse and keyboard and gamepad for way too long, and in VR you cannot really play like this,” says Olivier. “You want to interact with hands and grab things. Since the beginning I designed something around VR input – and today it’s put me in a troubling situation.”

Simply put: hand-wiggling VR input isn’t something most developers have access to yet. Some studios have constructed their own systems in C++, but Olivier is no coder – relying on UE4’s simplified Blueprint scripting to build his pyramid world.

After an hour in conversation with him, however, I suspect he’ll find a way. Olivier has already shown admirable audacity and confidence in approaching and impressing the corporate figures at the heart of the nascent VR industry.

The solo developer successfully begged Oculus for their unreleased launch schedule, so that he knew when to finish his self-funded project. And the company so admired Olivier’s work that, when he had his computer and Oculus DK2 stolen in March, they sent replacements (“That really saved my ass”). 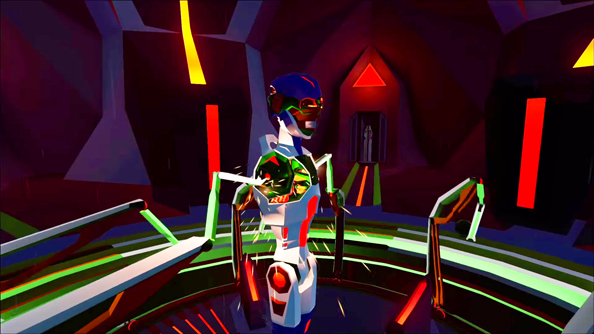 After cornering the brains behind Morpheus and PlayStation Move at a conference, moreover, Olivier was invited to the fifth floor home of Sony’s VR team. He spent a whole afternoon showing his work to a revolving assortment of staff – who, sure enough, are now helping him with his input problem.

In the meantime Olivier plans to fold ever more intricacies into Maze’s Tron-like environments, and expand his universe.

“I planned this for the long term,” he says. “I would like ideally to have [other developers join], saying, you know what? I want to do a detective story inside the city. Or an RTS game, where these guys leave the planet and have to conquer another environment. And they’re going to be able to do that.

Synthesis Universewill be released in five episodes to accompany the launches of various VR devices – starting with the HTC Vive, commercial Rift and Morpheus. Unreal Engine 4 development is now free.

In this sponsored series, we’re looking at how game developers are taking advantage of Unreal Engine 4 to create a new generation of PC games. With thanks to Epic Games and OlivierJT.