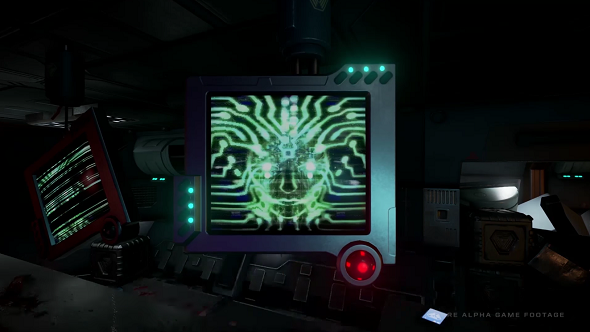 Update March 8, 2017: Developers Nightdive Studios want the System Shock remake to be as faithful as possible, but they’re not planning on ignoring the past two decades of progress in the craft of making videogames.

The team has been talking to some of the original Looking Glass Studios developers, and one of the biggest takeaways was that, if they made the game now, there are a bunch of things they would do differently.

“Whenever we look at the design, or art, or audio even, we ask ourselves “What would LGS do?” say Nightdive in a Kickstarter update. “The answer becomes clear after understanding LGS was about innovation, trying new things and bringing together concepts unheard of in games before them. We see ourselves as maintaining that tradition, and chat with the LGS guys to ensure what we’re doing holds up to their expectations.”

Other than plugging plot holes and refining dialogue, the story will remain untouched. The original voice actress for Shodan is returning and they’re letting her give input. Gameplay will also see a refresh, with combat given more depth and systems becoming more reactive.

“Levels will harken back to the original game thematically, but the layout will see a pretty big change to apply modern level design principles for pacing and exploration,” say Nightdive. “We’re not going to dumb things down, but we also don’t want to ignore the last 20 years of progress level design has made.”

As for the switch in game engines, it was just a case of Unreal being easier to use for this specific team and project. It hasn’t had an impact on visuals, as many assumed. The game, at this point, would look identical in Unity. What you see in the trailer above is a rough style, as art isn’t taking priority at this stage in development. Expect the game to look much better as development continues.

“We’re only 20% through our vertical slice, and there’s still a lot to do,” say Nightdive. “The next steps are getting interesting creature and environment behaviors, while also iterating on the hacking puzzles, cyberspace, weapons, and items. This is a big game, so we’re trying to tackle these components in order, starting with a solid tech foundation and an effective the process for getting art into the game.

“For now, we chose to bring art in we could finish quickly so we can get the other departments (like design) testing their stuff in engine. More elaborate and iconic art is coming, but remember, for this early stage of [vertical] slice, it’s about establishing a solid foundation to build upon.”

Original Story March 2, 2017: Nightdive Studios are showing off a bit more of their faithful recreation of the original System Shock, and it’s starting to look very nice indeed.

The trailer is helped along massively by the unsettling vocal talents of Terri Brosius, the returning Shodan voice actress. The AI sounds even more menacing now, thanks to modern audio techniques.

Nightdive have left Unity behind, instead opting to use the Unreal 4 engine. Judging by the trailer, this switch hasn’t led to a slowdown of progress – it’s looking lovely. Well, horrible, but lovely-horrible.

Over $1,300,000 was raised on Kickstarter for the title, but Nightdive have opened up to more funding for stretch goals on the official site. The next goal is PC mod support.

System Shock is due in 2018 and you can watch the new trailer above.