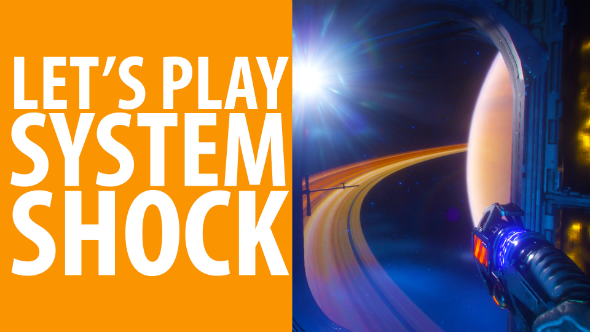 We couldn’t stay away from Nightdive Studio’s gorgeous vision of an updated System Shock for 2016 eyes, now could we? We’ve got mouths to feed and an ever-growing YouTube channel to fill with videos. Also we bloody love System Shock. Look at how nice this new one looks! Look at the clever way it looks like cutting-edge graphics from a distance, and warmly familiar pixel art close up! Now listen to us bang on about that for ages while failing to flick a switch properly.

Joel and Phil find themselves alone in a space station with worrying blood stains daubed across its retro-futuristic panels, and only aggressive robots for company. Do they have what it takes to navigate these unfamiliar surroundings, make sense of System Shock’s early ’90s mechanics and find a way to safety?

Sort of. If you give them enough time to flail wildly at anything that moves, scavenge for scraps in storage containers and commit multiple robot murders.

System Shock Remastered is storming through the Kickstarter process currently, and as a gesture of good will its developers at Nightdive Studios released the pre-alpha version we play above on Steam and GOG. You can play it too for free, if it looks like your sort of thing.

Which games would you like to see us take on next? Let us know in the comments.

{"schema":{"page":{"content":{"headline":"Watch us play System Shock Remastered, and shout at us for not understanding how switches work","type":"news","category":"system-shock-remastered"},"user":{"loginstatus":false},"game":{"publisher":"Night Dive Studios","genre":"FPS","title":"System Shock: Remastered","genres":["FPS","Puzzle","RPG"]}}}}