Being an analog board game publisher in 2018 comes with a unique set of challenges, including adapting to an increasingly digital world. Many publishers have begun to supplement their games with companion apps or have taken to releasing full versions of their games on Steam. In the case of Asmodee, an entire digital division has been created.

As the digital frontier for board games continues to be settled, questions of ownership and legality begin to arise – this is the internet after all. Unauthorised PC versions of board games are common, and one of the biggest offenders is Tabletop Simulator.

The flexible suite of creation tools offered by Tabletop Simulator allows modders to make any tabletop game they can think of. As such, since the game’s 2015 release, an army of modders have created an enormous amount of content. At the time of writing, there are around 9,000 board games available in the game’s Steam workshop, the vast majority of them based on real-life tabletop games. The problem is that most of them are unauthorised by game publishers. 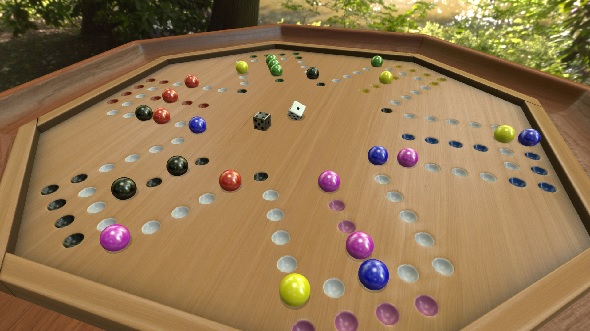 “These fan-made replications of our games are technically copyright infringement,” James Mathe, owner of Minion Games, tells me. “We could have them taken down. The big question is, ‘do they, like Let’s Play videos [on YouTube], do more good than harm?’.”

Mathe has been a part of the board game industry for a long time and has seen trends come and go. He has even leveraged his experience into a game design blog aimed at helping developers and publishers navigate the current renaissance the tabletop hobby is experiencing. But for all of his years in the industry, Mathe is torn on the role Tabletop Simulator plays in the gaming landscape.

“There isn’t a lot of money in our industry and there are a lot of indie developers,” he says, “thus the atmosphere in our little bubble is much different [from videogames]. We share information, we help each other, we give business advice… our industry is built on people being nice to each other for the most part.”

This sense of community and smaller scale is an important factor in how Mathe and Minion Games approach the issue of Tabletop Simulator. On one hand, many of the games in Tabletop Simulator are unauthorised, and art assets are used without permission. But, on the other hand, there is the potential that the sim is actually bringing in more players to the hobby, and so ultimately benefiting board game creators.

“I’ve done some research on this and for the most part I think they [it’s] a wash,” Mathe says. “They probably bring in as many new customers as they cost us in customers no longer willing to purchase a physical copy of our game. Thus, we have taken the stance of not authorising these modules but we are also not actively taking them down.”

Although Berserk Games, the developers of Tabletop Simulator, declined to comment, Gikerl was willing to open up a bit. Like Mathe, they say that community is important in the board game world, and that the community transcends legal qualms and cease and desist letters.

“I love board games, and having a way to play board games with people all across the world is great,” Gikerl tells me. “The Steam workshop of Tabletop Simulator enables me to discover and try out many games, some of them I ended up ordering. It does not replace the physical board games, though.”

Likewise, there doesn’t seem to be any animosity between Mathe and Tabletop Simulator. In fact, the relationship appears to be symbiotic. “Tabletop Simulator is, for the most part, accepted as a platform to help promote us little guys,” he says. “It helps get the games in front of new people and people without easy access to others to play in person.” This stance seems to be unique to tabletop gaming, as videogames and film seem to be constantly embroiled in copyright controversies. “The people in our industry making these great tabletop games are not these big companies,” Mathe says. “As such, Tabletop Simulator has made some inroads in providing alternative methods of playing games without being slapped with C&D letters.”

The board gaming hobby has exploded in popularity over the last couple of decades. Titles like Catan and Ticket to Ride have reinvigorated a once antiquated medium and attracted a legion of new players. According to Mathe, driving this renaissance is a desire to unplug from an increasingly digital world. For him, digital games and tools like Tabletop Simulator will never replace analog board games.

“In the end,” Mathe says, “the tabletop industry is based on in-person experiences with analog games. This is why Tabletop Simulator and apps and even phones as add-on tools to board games will never be the primary methods of play. People get into tabletop gaming to get away from the electronic world in most cases – to build in-person relationships and experiences.”