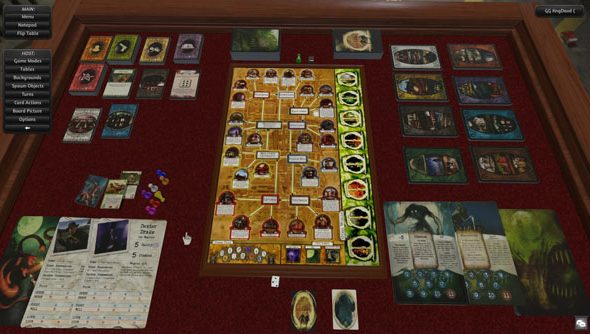 One Tabletop Simulator modder has taken the minimal precaution of naming his creation ‘Risq’. But that’s about as far as copyright awareness gets in Tabletop Simulator’s budding Steam Workshop, which brings the Pokemon Trading Card Game, HeroQuest and Monopoly’s Nintendo Edition to its wobbly desk.

Tabletop Simulator is a physics sandbox that allows its players to apply an age-old tactic to classic board games: knocking the pieces everywhere and retiring to your bedroom in a huff.

Its beta Steam Workshop does all the things you’d expect from TF2 or Left 4 Dead: lets modders upload their wares in a central hub, where players can download and subscribe to updates for the games that take their fancy.

There are hundreds of digitally-adapted board games available on the Workshop already. The top-rated include old Xbox favourite Uno, Talisman, and an unashamedly named version of Risk emblazoned with the game’s Global Domination logo.

It’s tough to know if all of them will be there this time next week – but a round of fumbled Fallout New Vegas Poker or King of Tokyo certainly appeals more than Chinese Checkers, don’t you think?

Tabletop Simulator is on Steam, purchasable for $14.99 on Windows, Mac or Linux.