Rats vs frogs is a matchup that probably only exists on the cutting room floor of an episode of Discovery Channel’s Animal Face-Off. It’s delightfully mundane, and yet developer Odd Bug Studio manages to forge a gripping rivalry between the two warring armies in Tails of Iron.

You play Redgi, son of King Rattus and newly appointed leader of the rat kingdoms, on the day your home is invaded by Green Wart and his army of barbaric frogs. It’s pretty clear who the bad guys are: the frogs are monstrous, their glassy eyes and jagged teeth bulging out of their heads, while Redgi and all the rats you come across pierce your heart with their beady little eyes and the adorable timidity with which they hold their paws. The frogs gargle and snarl whenever you meet one in combat, whereas the rats speak through the bouncy chirps of a penny whistle.

The rats in Tails of Iron are inspired by the game director’s actual pet rats, and as a former rat owner myself that attention to detail shines through. Balk all you want, but there’s so much character and warmth in a rodent’s eyelids, and Odd Bug Studio gets that spot on.

This centuries-old interspecies rivalry is established in a short intro cinematic, in which we also hear the raspy, toneless voice of narrator Doug Cockle, who you’ll doubtless recognise as the American voice actor for The Witcher 3’s Geralt. It doesn’t feel like a particularly necessary addition, but Cockle’s raspy narration certainly lends itself to Tails of Iron’s ostensibly grimdark setting. 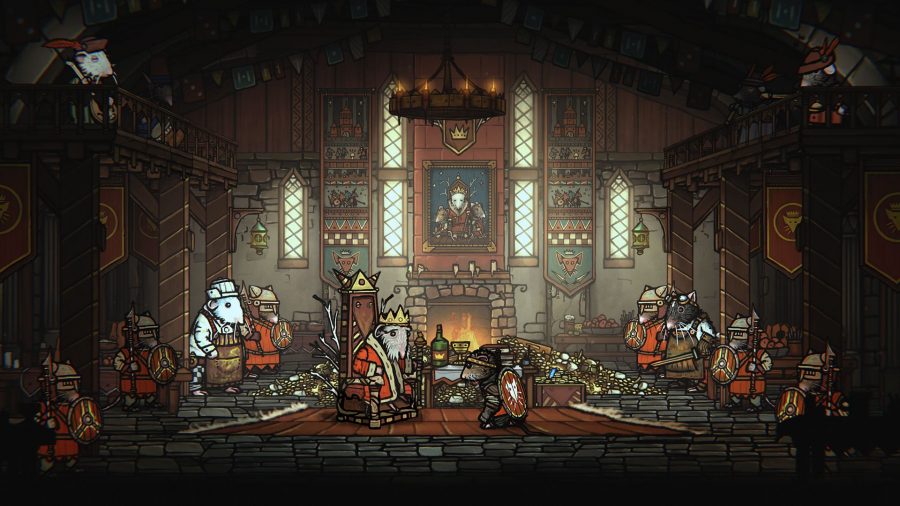 I say ostensibly, because there’s plenty of humour between scenes of adorable rodents getting their brains bashed out by hulking toads. I consider myself amphibian ambivalent, so I’m surprised to feel a real sense of animosity by the time I finally get to fight some frogs.

I think I hate frogs now

Combat takes place in tight 2D stages and has the methodical pace of a game like Dark Souls. There’s not much choice when it comes to dealing damage; there are different weapons to choose from, but for the most part you’re stringing together basic slashes and charged attacks. And that’s fine, because the challenge in Tails of Iron revolves around dodging, parrying, and managing space.

Enemy attacks come in a few different flavours: three red lines above an opponent’s head signals an attack that’s too powerful to block, so you’ll have to dodge-roll through it. You have to parry when you see three yellow lines, which involves bringing your shield up and clicking attack at precisely the right moment. Finally, a red circle telegraphs a high-damage attack, which you can only escape by dodge-rolling away twice in quick succession. 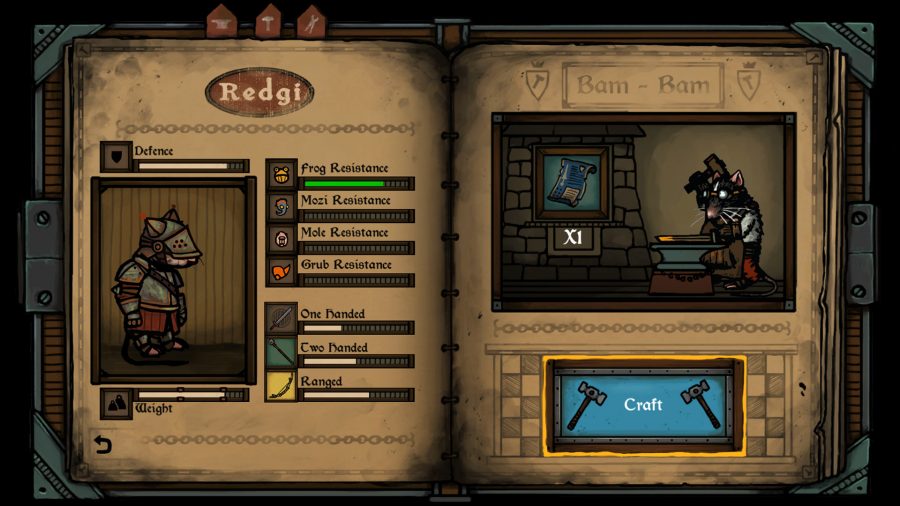 Fights are more about reacting to what’s in front of you than seizing the initiative, but hitting the right counter is not as simple as it sounds, especially when you find yourself in a tiny 2D arena with three or four froggy foes. Heavy brutes will attack less often, but when they do you’ll need to keep your distance, which often means staying in the pocket with one or two more aggressive enemies. Maybe there’s an archer above you, testing your reactions by firing an arrow into the mix at regular intervals.

You’ll break into a sweat in no time, but there’s some relief thanks to the gratuitously gory finishers that cap off every kill. Watching a bloodied, beleaguered rodent give his sword one final shunt as he forces it through a frog’s head is cathartic stuff.

While the combat itself is pretty gruelling, Tails of Iron isn’t interested in punishing you. Save points are frequent and take the form of benches at which you can rest, much like in Hollow Knight. There is a flask-based healing system – it’s bug juice not estus that slakes Redgi’s thirst – but rather than taking several seconds to replenish a chunk of your health, you can heal over time for as long as it’s safe to do so. This makes healing during a fight much less fraught, giving you a few more chances to get the measure of your opponent. 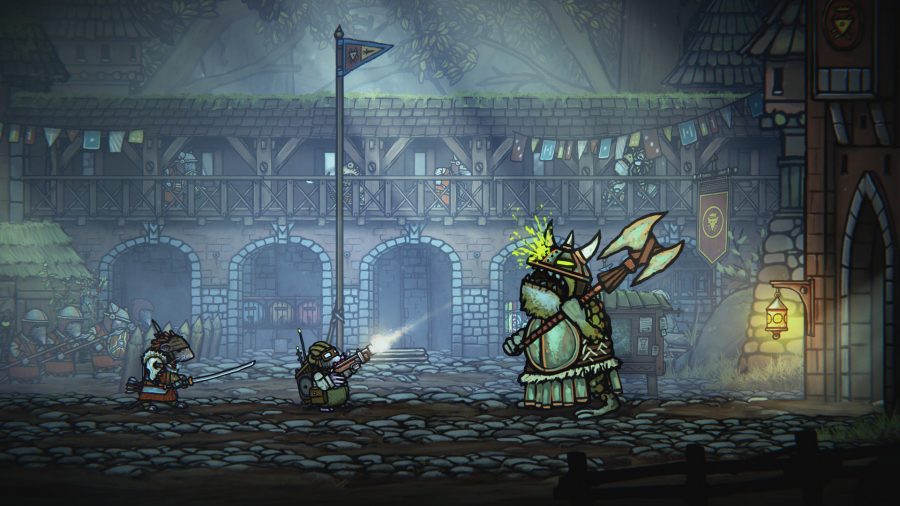 Tails of Iron is also a gear-based RPG, and judging from a few short experiments with different loadouts, it does seem like there’s some give in the general pacing of combat. A heavy setup, for example, requires impeccable timing but can clear out grunts in no time. Spears offer exceptional range, but inflict very low damage. It’s all fairly standard, but it’s impressive how well minor stat changes translate to the battlefield.

I’ve been following Tails of Iron for a while now, mostly as an advocate for more rat games, but after an hour gouging, battering, and jabbing warty toads I’m thoroughly impressed with how crisp it feels. That’s just as true outside of combat, where a layered parallax effect brings depth to every backdrop, and tiny details in every animation bring our beady-eyed hero to life. The only downside from this brief glimpse is that I think I hate frogs now.