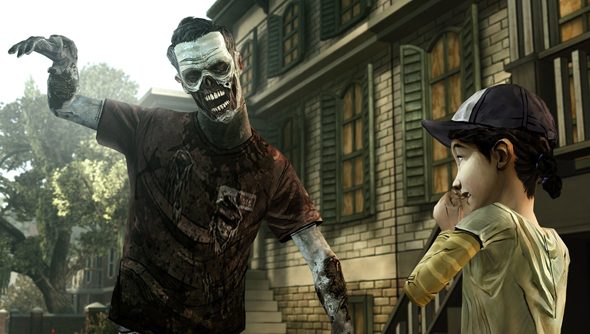 Outside of a Walking with the Dead BBC rot-umentary, The Walking Dead couldn’t feasibly be adapted to any more mediums – so I still enjoy taking the odd moment to remember that ours got the best.

There are two ways of looking at the Walking Dead Season 2 premiere coming the week after next: as a threat to that warm, fuzzy feeling Season 1 left in its wake, given the absence of its key creative directors; or a welcome chance to see where last year’s best idea might go next.

Former Walking Dead designers Jake Rodkin and Sean Vanaman have decamped to Campo Santo, their new studio with Mark of the Ninja mind Nels Anderson and ace artist Olly Moss. Now I write those names in succession, it’s impossible to begrudge them the chance to bang their heads together. The creative ricochets will be felt for years to come, I’m sure.

But it does leave Telltale in the somewhat unenviable position of following up their by-far greatest critical success to date without the brains that planted them there. Transitional DLC 400 Days introduced some of Season 2’s characters with full input from Rodkin and Vanaman, however – and there’s no reason to suppose that momentum can’t carry the remainder of what was clearly an astonishing team through Season 2, if not beyond.

Season 2’s first episode, All That Remains, kicks off “many months” after the conclusion of the last, and finds a new protagonist in wee Clementine, the player’s charge throughout the first series. Telltale have pledged to put players in “situations and dilemmas that will test your morals and your instinct for survival”, which should be exactly what we need in the run-up to the notoriously contemplative New Year period.

The date’s emerged in The Walking Dead’s Steam listing, where you’re now able to pre-purchase the full season for a cut-price £17.09. A little enough number to take a punt on, do you reckon?