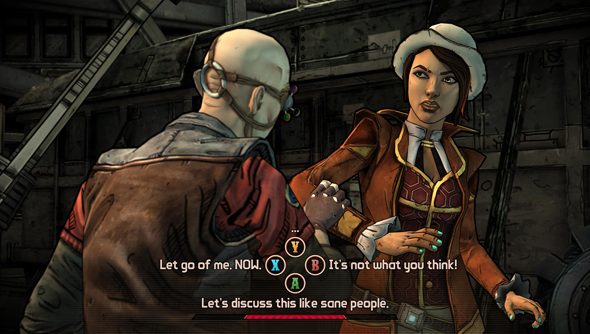 Like Ken Watanabe watching his radioactive eggs, we like to keep an ear trained on the noises emanating from our Fraser’s study. Wailings, cacklings and chatterings are all par for the course, but our watchman last night reported something highly irregular: giggling.

Fraser’s been busy reviewing the first episode of Tales from the Borderlands, see – and it seems that Telltale’s first concerted effort at funny in quite some time has paid off. Until it arrives, we can sustain ourselves gnawing on interview snippets with the top brass at Gearbox.

Perhaps, given the choice, we’d prefer to hear from the Telltale staffers who’ve had their hands all over the new game. But in the video below you’ll learn a little about the limitations of storytelling in shooters, the kernel of Gearbox and Telltale’s relationship in Poker Night 2 – and the strange fate of Handsome Jack.

“Myself and [Gearbox writer] Matt Armstrong are constantly going down to Telltale and basically sitting in story meetings with them,” says chief Gearbox word man Anthony Burch. “We helped come up with the overall season arc of the story.

“We’re not writing the actual dialogue because Telltale’s just better at that. But we’re trying to help see where the story’s going to go, where it fits into our overall Borderlands universe.”

For comparison, here’sTelltale on the Borderlands universe.

You might have caught a glimpse just now of how Tales from the Borderlands is going to work – the now-familiar wasd-and-click set-up with its roots in The Walking Dead, interspersed with the sort of quick-time events that don’t make you want to quick-step to the nearest mains socket and give up games for good.

We’ve been told to expect Tales from the Borderlands soon. It’ll be released in the customary Telltale fashion – as five $4.99 episodes. What’d you like to see in it?