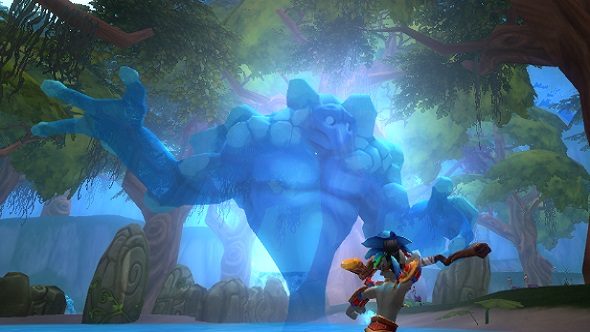 After being delayed back in September of last year, old-school RPG Tanzia is at last making its way to Steam Early Access on April 27. Developer by Arcanity Inc who are made up of alumni from studios like InXile Entertainment, Obsidian Entertainment and Sony Online Entertainment to name but a few, Tanzia hopes to bring together classic action-adventure design with modern technology to create a top class RPG.

All you wizards and warlocks better look at our definitive list of the best PC RPGs.

Taking place on the eponymous island of Tanzia, players take the role of a trainee shaman who must fight back against an ancient evil which is slowly consuming their homeland. With the help of the tribe elders, you must trace the path of your ancestors and seal away the darkness that threatens to destroy your people. While it sounds like your standard RPG plot, Tanzia differs from traditional RPGs by having the whole island open to you from the very beginning. If you really desire, you can beeline straight for the hardest area and try to quell the ancient evil as soon as possible. You’ll probably won’t succeed but the freedom is welcome.

The actual combat is very similar to that found in most MMOs, with players being able to kite enemies into specific situations and casting abilities from a dedicated hotbar at the bottom of the screen. You can augment your spells with special alchemy items, giving your magic that little extra oomph to take down a tough enemy. Exploiting enemy weaknesses and crafting the best spell cycle will be crucial to conquering some of Tanzia’s hardest foes.

As you travel from zone to zone on the island, you’ll complete quests, unlock new spells and eventually become powerful enough to defeat the evil Skeleton King. At the beginning of early access, everything besides the last few chapters will be accessible with Arcanity planning to add extra chapters during development. Players will still be able to keep questing once they reach the end of each build, allowing them to continue levelling and finish any sidequests they might not have got round to. The final chapter will only become available on the game’s full release, as to not spoil it ahead of time.

There will be irregular updates to fix bugs, but the current plan is to release the remaining chapters in two week intervals. Arcanity only plan for Tanzia to be in Steam Early Access for eight weeks, meaning the full game should be out sometime in late June/early July.

Arcanity are planning that anyone who buys Tanzia during early access will get access to the Deluxe edition, for the price of the standard edition. While the standard edition is just a copy of Tanzia, the Deluxe edition include the game, its soundtrack and its web-comic as one single package. No pricing details are available just yet but keep an eye on Tanzia’s Steam page for more information.