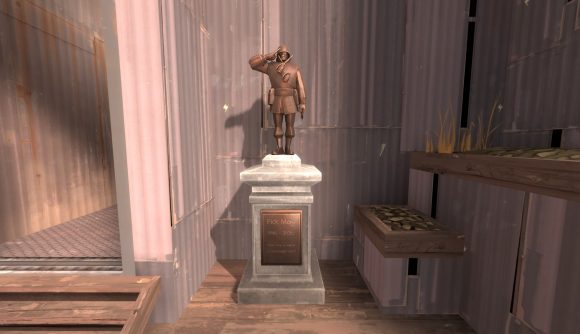 The man who provided the voice of Team Fortress 2’s Soldier, Rick May, died last month due to complications associated with the coronavirus. In a May 1 update, Team Fortress has added commemorative statues to several maps in honor of May, and you can see them in game now.

May had been rehabilitating in a Seattle-area nursing home after suffering a stroke in February when he contracted COVID-19. He was 79 when he died, and was a U.S. military veteran who had coordinated USO shows while stationed in Japan. Following his military service, May returned to the Seattle area and worked in the theater, working as the director of the Renton Civic Theatre and Civic Light Opera. Eventually he went on to found his own theatre company in nearby Kirkland, and worked full-time as an actor.

He had at that point already appeared as the voices of Peppy Hare in Star Fox 64 and Genghis Khan in Age of Empires II. In 2007 he took on the role of Soldier in Team Fortress 2, working with Valve just south of Kirkland in Bellevue, Washington.

The in-game tribute to May includes new main menu music, with Soldier appearing alone on the main menu screen. There are statues of Soldier now on nearly every map, and when you approach them, you’ll hear a series of May’s memorable voice lines for Soldier.

According to Valve’s in-game news ticker, the tribute will last throughout the month – which is, as it happens, the month of May.