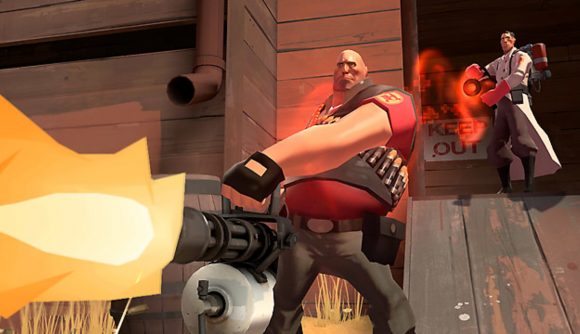 Valve still hasn’t offered any official comment on the bug that’s currently wreaking havoc in the Team Fortress 2 economy, but the developers have disabled access to inventories on the Steam market as they – presumably – work to fix the bug that caused all the exploits in the first place. In the meantime, TF2 player counts have hit their biggest peaks in months as users rush to take advantage of the exploit.

The TF2 item server is still up, as Wickedplayer494 notes on Twitter, so you still have access to your items in-game – you just can’t get to them via the market interface, and thus can’t buy, sell, or trade them. Even before Valve took this action, third-party trading sites including Backpack.tf and Marketplace.tf had already begun to disable functionality for the duration of the bug.

Amid all this, TF2 player counts hit a peak of 93.245 players – the biggest organic number the game’s hit all year. According to teamwork.tf, it looks like they were mostly in the main menu, as counts haven’t really been affected in actual game servers. The numbers have stabilised closer to normal since Valve locked down inventory access.

Regardless, the damage seems to have been done. As Eurogamer reports, prices for crates have skyrocketed – they’re normally just pennies, the bottom price you can charge on the Steam market – while prices for rare items have bottomed out. It remains to be seen what Valve does to restore economic equilibrium, because if things stay as they are, the game’s market might not ever fully recover.

If you’ve missed everything that’s happened with the bug so far, ‘Unusual’ items in Team Fortress 2 are usually pretty hard to come by. They’re some of the rarest items in the game and you only have around a 1% chance of unboxing one from a Mann Co. Supply Crate if you don’t go down the trading route – until yesterday, it seems.

On the Team Fortress 2 subreddit today, moderator Wickedplayer494 posted a warning to players about what they believe is a bug or flaw causing the special items to pop up in certain crates. Their post says “don’t trade for any TF2 items at this time – a serious economy flaw exists where certain unboxes are guaranteeing Unusuals.”

The user states that “there have been numerous reports, and sightings in the wild, of an apparent serious economy flaw that is resulting in the guaranteed uncratings of Unusual quality items. As a result, demand for certain types of crates believed to be affected has soared, and supplies of Unusual quality items are flash flooding the market.” They add that the automated Team Fortress 2 trading site Scrap.tf has “disabled its Unusual banking feature as a result.”

Though Valve has yet to confirm what happened, a Team Fortress 2 update did drop yesterday and it’s possible that a bug or small glitch could have crept in with it, as can happen sometimes. Wickedplayer has also posted a graph on Twitter seemingly showing a spike in TF2 players yesterday, which they suggest is “most likely as a result of a surge of people attempting to cash in on the previously mentioned economy flaw.”

We have reached out to Valve and will update the story with any new information.