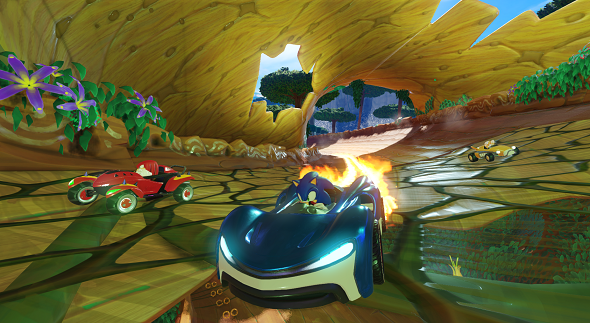 Sega officially unveiled Team Sonic Racing today, along with a proper teaser trailer and some details about the game. It’s being developed by Sumo Digital and lets you team up with players to take on rival squads together.

One of the more interesting features in this Sonic racing outing is the team mode, which allows you to use “team moves,” including a team ultimate, to take down opponents on the track. You’ll have several modes to pick from, including Grand Prix, Exhibition, Time Trial, and something called Team Adventure, where you can learn the basics of the game on you own or as a team.

The reveal trailer doesn’t offer a lot of info on its own, but we get a decent look at a pair of cars driven by good old Sonic and longtime rival Shadow. There’s a total of 15 playable characters from the Sonic universe in the game – and yes, you’ll be able to customise the look and performance of their rides.

Here’s the reveal trailer in all its brief glory. It’s much nicer than the teaser Sega showed at SXSW in March.

Developer Sumo Digital has worked on several Forza titles in the past and were behind 2010’s Sonic & All-Stars Racing Transformed, which brought in a hilariously diverse cast of characters from across Sega’s catalogue – including Willemus from Total War: Rome II. This time, however, Sumo Digital has limited the roster to the official Sonic-verse.

Sega says we can expect Team Sonic Racing this winter. The announcement comes after the game was inadvertently leaked on Walmart’s website early this morning.