Looking for a handy cheat sheet of Teamfight Tactics item recipes and combinations? There are eight items you can start with in Riot’s League of Legends autobattler, but you can combine two at a time to make a more powerful item. That’s a lot of item combinations and, to be frank, remembering all of that is a bit of a task in of itself.

Knowing how these items combine is an integral part of Teamfight Tactics, too. Crafting new items is not a simple case of making them better, and different item combinations will be more useful to certain Teamfight Tactics classes than others. The Infinity Edge, for example, is a combination of two B.F. Swords and it boosts critical strike damage by 200%. As such, it would suit any Champion of the Assassin class nicely, as critical damage is what they’re all about. If you combine well tooled Champions with finely tuned TFT comps, you’ll shred.

So, throughout this guide, we’ll tell you how all these items combine, and which Champion you want to be keeping in mind when you’re starting with the base item. Now that’s out of the way, here are the Teamfight Tactics recipes.

How do I get Teamfight Tactics items?

There are two ways you can find items in TFT. The first, and more common, is through random drops from Creep waves. These fights happen at specific intervals and escalate in difficulty as the game goes on.

The second way you can get items is by refunding the Champions you pick up from the Carousel, as they come with one already equipped. You’ll have to do this at the expense of a Champion, obviously, so make sure it’s worth it.

You can find your collected items at the bottom right of your screen – if you’re struggling to spot them, they come in cubes and sit on the map, rather than in an inventory screen. If you want to equip one to your champion, click and drag it onto the character of your choosing.

How do I combine Teamfight Tactics items?

First things first, to combine two items you’ll need to have already equipped one to your chosen champion. Then all you have to do is click and drag the other item over them. Quite handily, when you pull an item over your champion, you’ll get a small window telling you what you are about to forge.

If you’re happy with it, press ahead. Word to the wise, though, once you combine two items, there’s no going back. So craft carefully. 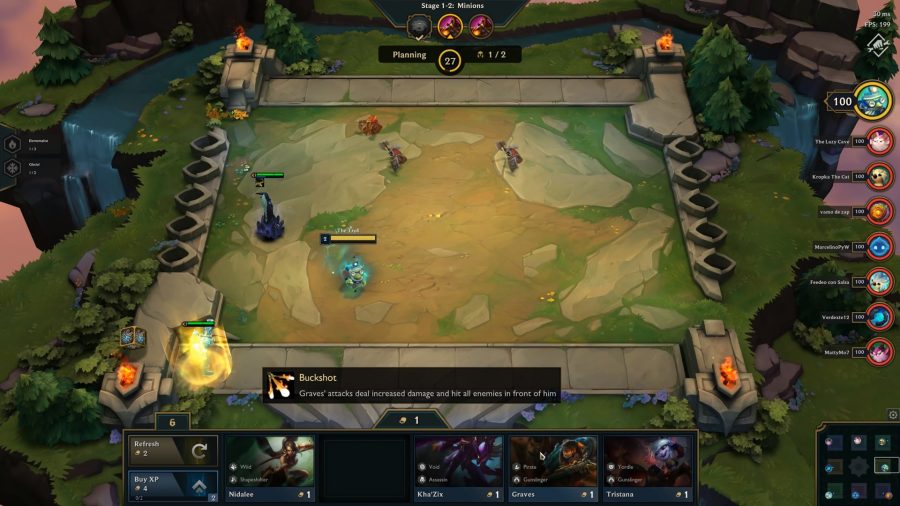 On its own, the B.F. Sword offers up a +20 buff to attack damage, so this is a great item to stick on any champion that’ll be front lining or dealing melee damage. Some good ones to keep in mind are Zed, Kha’zix, or Shen.

Darius is also a good choice as you can forge a Hextech Gunblade later on if you come across a Needlessly Large Rod though any of the above champions could make good use of that.

This item will buff your defence by 20, so stick it on a frontliner to make them tankier. Blitzcrank, Garen, and Mordekaiser are good Champions to keep in mind for this.

Another good pick is Leona, who you can kit out with a Locket of the Iron Solari is you find a Needlessly Large Rod later on.

The Giant’s belt, by itself, gives the wearer an extra 200 health points – so put it on any Champion you’re looking to turn into a tank. Mordekaiser, Rek’sai, or Sujuani are good shouts if you’re struggling.

Our pick, however, is Volibear. He already has quite a large health pool, but stick a Titanic Hydra on him when you find a Recurve Bow and watch his damage soar.

If you equip the Needlessly Large Rod to a Champion you’ll boost your spell damage by 20%. To that end, think about applying it to Ahri, Anivia, or Aurelion Soul. Another top shout is Varus, who works quite well with a Luden’s Echo.

Before you turn it into anything else, Negatron Cloak buffs your magic resist stat by 20. So think about adding it to Braum or Blitzcrank if you want to build a champion with exceptionally high resistance to magic.

Poppy also works well as you can build her with a Dragon’s Claw, which makes her close to invincible against magic users.

The Recurve Bow gives you an additional 20% to your attack speed and is a pretty flexible item – you can’t go wrong if you’re building up any damage or magic dealing character. Keep your eye out for Vayne, Nidalee, or Pyke, if you want some decent options.

A personal favourite of ours is putting this on Ashe, as you can then forge a Statikk Shiv when you find a Tear of the Goddess. When in full flow, this build plays around her strong mana and attack speed stats nicely.

The Spatula is a bit of a peculiar item as it doesn’t offer you any advantages – not at first anyway. One of its primary purposes, however, is giving heroes an additional Origin or Class – meaning that they’ll mesh with others who have that Class or Origin in common, and gain specific buffs as a result. It may seem minor, but the Spatula is a wildcard that can swing a fight.

Apart from that, it can also combine to make other handy items like the Runaan’s Hurricane, which works quite nicely on anyone who builds around physical damage.

This item adds 20 to your starting mana before it’s combined with something else. It’s a good idea to put this item on magic users who are likely to burn through a lot of, well, mana.

Swain and Tristana are good picks to fill that role, but Varus is the one we opt for, as he has good ability power and mana. Keep an eye out for a Needlessly Large Rod to create a Luden’s Echo for some stiff splash damage.

And there you have it, TFT recipes and item combinations alongside our two cents on what champions to keep your eyes peeled for. That’s just our opinion, though, and tailing your TFT tactics comes down to personal preference. Regardless, a good knowledge of items and how they combine is imperative to victory – and for that, we wish you good luck. That’s if you make it through the load time and get a game, anyway.