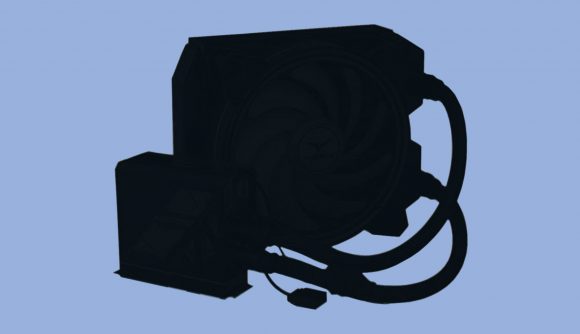 Teamgroup’s annual launch event is fast approaching and should herald all the usual suspects, from new large capacity storage to DDR5 RAM modules that are ready for Intel’s Alder Lake CPUs. Wccftech spotted one product that stands out from the crowd, however, and that’s an all-in-one water cooled SSD.

Teasing the Cardea Liquid II SSD as a silhouette, it looks to take all the cues you’d expect from the best AIO coolers, from the 120mm radiator to its dual tubes that feed into a water block. There’s even the outline of an RGB header dangling next to the pump. It’s not clear exactly how the closed-loop fits into your gaming PC just yet, but the water block likely connects via PCIe given it’s a little too chonky for a regular M.2 slot, and it could potentially house more than one NVMe SSD at a time.

As you can probably tell from its name, the device is the successor to the T-Force Cardea Liquid water cooling SSD that Teamgroup released in 2019. In fact, the idea of a water cooled SSD goes back even further with EK’s DIY water block in 2015.

So, should you water cool your SSD? That depends.

We’ve seen a distinct rise in passive coolers for NVMe SSDs with the release of PCIe 4.0 because drives are getting faster, and as with any hardware that ups the ante, faster means hotter. Without even knowing the performance of the Cardea Liquid II, we know that water cooling is much more effective than passive cooling and should let you push SSDs even further than they’d normally go.

We released the first water-cooling SSD in the world in 2019. It was a closed-loop water cooling system. Now we are developing a new SSD which has a looped liquid cooling system with greater cooling! Looking forward to it? Stay tuned!https://t.co/5GroakWHFK #TeamEvent2021 pic.twitter.com/f9x6TcBfrm

It’s difficult to tell whether it’ll be worth it for gamers, though, as a cooler SSD might not mean quicker loading times. We’ll also need to consider how much the device costs to know its true value. Our best guess is that the Cardea Liquid II is intended for overclockers and enthusiasts wanting to go the extra mile to cool the best SSD.

We should find out more on September 26, where it’ll debut alongside the Cardea A440 Pro NVMe SSD, Vulcan DDR5 memory, and Delta RGB DDR5 RAM. There are even plenty of giveaways to whet your appetite in the run-up, including the chance to win a special edition Monster Hunter Rise Nintendo Switch console and game.