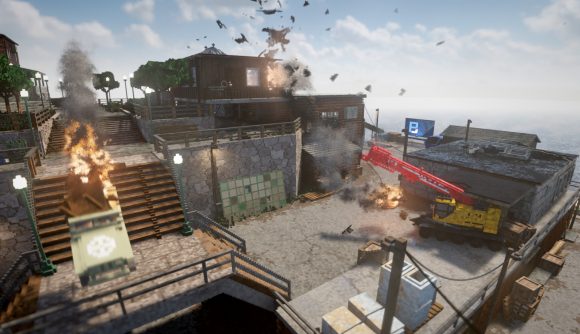 There’s a page on Facebook that’s entirely dedicated to sharing over-baked memes about how great forklifts and forklift operators are. A lot of what fuels it, apart from propane, is the fact that it’s hard to look at a piece of heavy machinery like that without enviously imagining how much fun it would be to get into one and wreck shop. Fortunately there’s Teardown, which is out now on Steam Early Access.

The idea behind Teardown, as we excitedly noted when we first saw it, is that the lovely little voxel environments are all completely destructible, and you’re given a satisfying range of tools with which to do exactly that. There’s a campaign that has you levelling buildings, and it’s possible to do that with either a standard-issue sledgehammer or a front-end loader parked nearby. Either way, the walls and windows and brickwork all crumble pleasantly under your swing.

After emerging on Early Access October 29, Teardown has already found some success on Steam: it hit a peak of more than 8,000 concurrent players on the day of launch, and looks like it’s poised to repeat that – or perhaps even exceed it – today.

There’s also a heist element involved in Teardown: you’ll have to scope out a target property, then blast, smash, or crash holes and other destruction in it in order to create a speedy pathway through that allows you to gather all the required keycards before the authorities arrive.

That sounds fun, but so far we’ve been content to break holes in plaster voxel walls with our hammer. You can always have a look through our list of the best building games if you’re more interested in creating than destroying, but the siren song of crumbling bricks is calling to us at the moment.