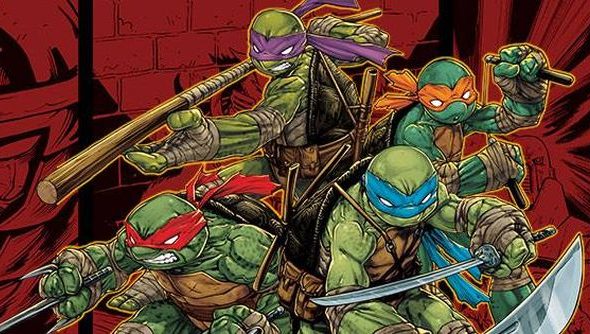 Platinum Games of Revengeance and Bayonetta fame continue their licensed streak, following up Korra and Transformers with another fan favourite franchise of questionable science – Teenage Mutant Ninja Turtles. Mutants In Manhattan, as the new game is called, is a cel-shaded brawler with the focus squarely on jumping online to team up with three other green ‘n’ scaley ones to fight various iconic villains from the series.

Just another addition to the engorged mass that is the best upcoming PC games.

The good: it looks just wonderful. I am that one guy who is still a total sucker for cel-shading so this is right up my alley, even if the nostalgic factor isn’t there for me. Having worked in a comic book store for over a year and lived on the internet for most of my life, I’m still surprised people think the TMNT are cool. They’re giant turtles – like, come on nerds. Platinum do a good job of selling them to me in this trailer though, where they at least look like a group of badasses, if giant, green, pizza-obsessed ones:

Looks like a fun, Platinum time. They’ve clearly found a formula they’re happy with making these budget tie-in games that exploit their ability at creating great fight scenes to make something cool dressed up however a particular franchise demands. They’ve never been the best games, with both Korra and the more recent Transformers: Devastation splitting opinions down a “good for the price” and “not worth your time” line.

This looks to be following suit. While online co-op is encouraged and single-player switching between characters is possible, there’s a distinct lack of local co-op mentioned anywhere. With the speeds Platinum games work at it’s an understandable omission, split-screen being a resource-hog on even simple games, but if there’s one franchise that made its name on couch co-op, it’s TMNT’s SNES-era classics.

Some more details over in Activision’s announcement post. It’s coming out on old and new gen alike (please be the last year of that, 2016) some time this summer. The next movie, Out of the Shadows, is releasing June 3rd and would probably make an acceptable bedfellow if I’ve understood capitalism properly.