Telltale producer Adam Sarasohn has spilled the beans on the adventure game studios Borderlands spin-off. Not all the beans, but enough beans so that it’s hard to count them all.

Why is Telltale forging an adventure game out of Gearbox’s shooter, you ask? “Because, if you pause to take a breath between shooting everything in sight and stealing your buddies’ loot in multiplayer, you’ll know that Borderlands features some amazing characters and stories in a world that’s rich in dark humor,” says Sarasohn.

I’m infinitely more interested in what Telltale plans for the series than what Gearbox has already done with it. Anthony Burch’s writing on Borderlands 2 kept me going, but god, it was a slog. There’s not enough time in the day for me to spend hours grinding away, even if I am getting to collect ridiculous – and delightful – guns.

But the story, the characters and the world – these were all wonderfully realised. 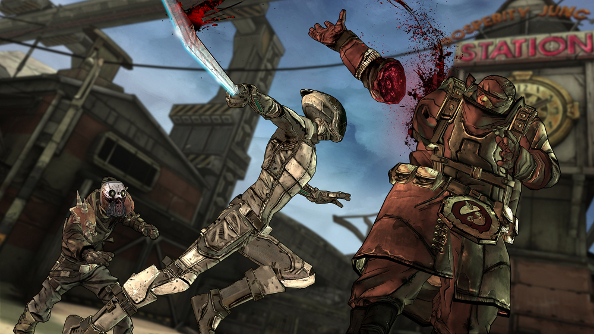 “Pandora has a wealth of stories to offer, and Gearbox wants them told,” says Sarasohn. “Telltale is going to collaborate with you through the choices that you make to get some of those stories out there, and to create a brand new Borderlands experience. If you play Borderlands simply for the sake of shooting stuff, then you might not be a fan of Tales, but if you enjoy being on Pandora, hanging out with and finding out more about all of the amazing characters, and/or you’ve enjoyed what we did in The Walking Dead and The Wolf Among Us, then this might be a game series for you.”

Tales from the Borderlands will reveal the mysteries of Pandora from two very different perspectives. “Rhys works for Hyperion; he’s a company man with grand ambitions that have been thrown off the rails. Fiona is a fast-talking con artist, with very few people left on Pandora she hasn’t swindled one way or another,” Sarasohn explains.

Tales is connected to the rest of the Borderlands franchise through more than just the setting. Loot, being the main driving force behind the series, can be collected in Tales and then used elsewhere in the franchise.

$4.99 per episode is what you’re going to be paying, at least on the PlayStation version. Though undoubtedly the whole series will be immediately for sale on Steam, with each episode unlocking at the appropriate time, just as with The Walking Dead and The Wolf Among Us.