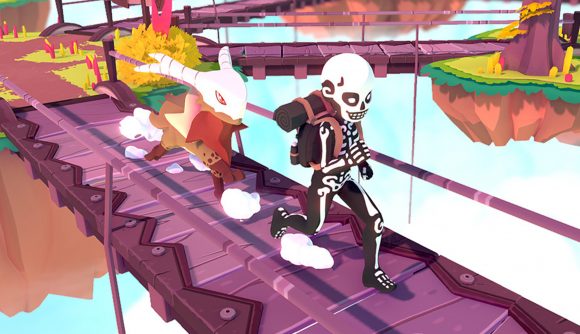 The Temtem roadmap is here at last – or the first part of it, at least. The first part of the roadmap includes loads of plans for 2020, including ranked matchmaking, two new islands, and around 50 new creatures – though developer Crema notes that the specifics are all subject to change depending on how development goes from here.

Ranked matchmaking will launch this spring, with an ELO-based ranking system and frequent, though not “obsessive,” balance patches, as the developers explain in a blog post. The ranked queue will also feature auto-scaling, which will “essentially perfect your Tems, upping all their SVs up to 50 for the battle and their level to the current level cap (currently 48).” That’ll prevent you from having to grind to stay competitive, but leaves the door open for hard-trained temtem to still dominate in high-end PvE and player-run tournaments.

The spring update will also introduce a spectator mode for competitive matches, which will surface only “common info” so that players can’t exploit the tool. A new implementation of in-game chat will also be introduced, as well as and clubs – Temtem’s version of clans.

We’ll hear more about the features planned for the rest of the year tomorrow, but Crema has already revealed what to expect broadly for those additions. Summer 2020 updates will bring a new island, Kisiwa, around 25 new temtem, infinite player housing on Atoll Row, climbing gear, and a revision of emotes.

The Fall 2020 updates will add yet another island, Cipanku, and another batch of around 25 new temtem. We’ll also get the first mythical temtem around this time, likely equivalent to a legendary Pokémon. Additionally, we’ll get in-game tournaments, the long-awaited quest diary, and an in-game achievement system.

Do I hear…roadmap?
The short-term roadmap is here, with tons of info on what to expect from Temtem in the upcoming months!
You can read in-depth explanations here: https://t.co/jSxLbhMyeX
Still wanting more? Tune in tomorrow at the same time for even more roadmap! pic.twitter.com/7eCgaJcaJH

We also know that an auction and trade area and a Nuzlocke-inspired mode are on the way, per the plans on the game’s Steam page.

Whatever comes next, Temtem’s sales so far – now over 500,000 worldwide – have cemented its status as the premiere Pokemon PC game. You can check out guides to Temtem starters and the best temtem overall for help dipping your toes into this weird, wonderful world.