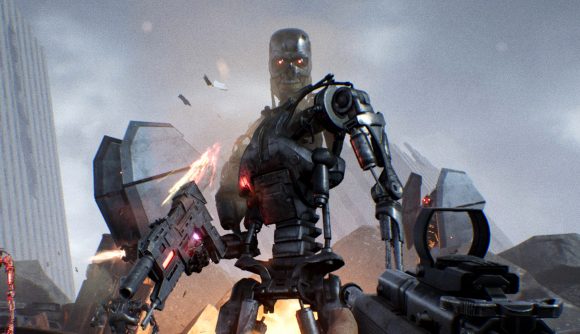 Nearly two years after the release of Terminator Resistance, the FPS is getting a story expansion. Publisher Reef Entertainment has announced that a set of “brand new” Terminator Resistance story DLC is on the way, but it won’t be sharing any more details until the game’s anniversary in November.

The original Terminator Resistance was released in November 2019 and featured a new character, Jacob Rivers, fighting alongside John Connor in the Future War against Skynet and the machines. It was based on the original movies – confusing a lot of people, considering it was released alongside the latest movie Terminator: Dark Fate, which changed a lot of the series’ canon.

Resistance actually received a piece of free DLC in November 2020, Infiltrator Mode, where the player controls a T-800 Terminator to hunt down and kill a particular Resistance member. Now Reef Entertainment is promising “one last mission” as story DLC for November 2021, which may actually get released then if the pattern holds true. According to Reef, the DLC will be set after the events of the main campaign.

It could just be a cute quote, but “on your feet, soldier” is a line spoken by John Connor to Kyle Reese, so we would hazard a guess that players may actually take control of Reese in the final mission before he’s sent back in time to assist Sarah Connor – unless Doctor Who messes things up again.

On your feet, soldier. John Connor has one last mission for you.

Prepare yourself to venture beyond the Annihilation Line in a brand new story DLC for #TerminatorResistance – we’ll have more details to share in November.

The news of DLC for Terminator Resistance is something of a surprise, given that the game still hasn’t received an Xbox Series X release and we assumed developer Teyon had moved on to another iconic ’80s franchise, RoboCop: Rogue City. We’ll find out more in November, then.