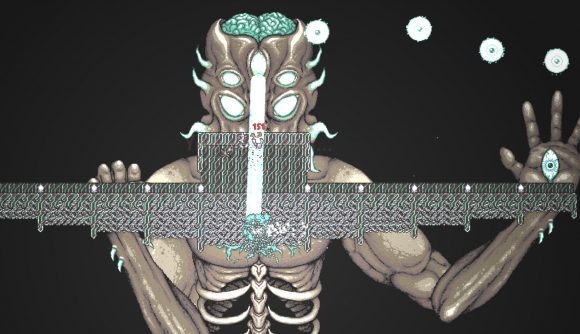 The devs have confirmed that Journey’s End is scheduled to launch May 16 at 10:00 PDT / 13:00 EDT / 18:00 BST. Pending any issues with the Steam rollout, that’s when you can expect to start downloading. The Re-Logic team will be hanging out with Twitch streamer Kargoh during the “pushing of the button”, so if anything catches on fire during launch you’ll probably find out about it there.

Re-Logic has published a massive changelog for Journey’s End, and while it’s far too big to list everything here, some of the highlights include Journey mode, which basically acts as an open-ended official cheat menu. There are new weather effects, pettable dogs, fresh art, a host of quality of life changes, new items, and, er, golf.

Journey’s End will also see the launch of tModLoader as free DLC directly through Steam, which should make loading up your mods of choice substantially more convenient.

We’re long past the days where Terraria seemed like a 2D Minecraft clone. It’s dug out its own niche among the greats of sandbox games, and Journey’s End seems like a terrific way to bring the years of free content updates to a close.