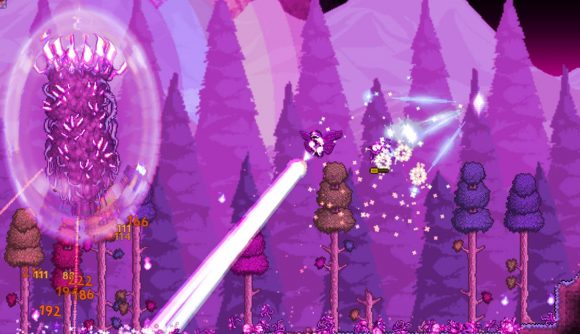 Terraria: Journey’s Actual End might have arrived already, but that doesn’t mean the, er, actual end for the action-adventure game. Following the title’s “final content update”, developer Re-Logic has announced some upcoming support that’s on the way to help players share their own creations with each other – via Steam Workshop.

“Steam Workshop support for texture packs and map sharing is coming!”, the studio announces in a forum post looking at the current state of the game. “That’s right, with all of the planned content updates behind us, we are taking the time to look into raising the bar in regards to how players can interact and share their creations with each other!”

Re-Logic says there’s still a decent chunk of work and “additional iteration” remaining to do before Terraria’s Steam Workshop support will be ready to launch, so it doesn’t sound like it’ll be ready for a little while yet. The studio adds that it’ll naturally have more to share about how the tool’s support will work once it’s a bit further into development, too.

One thing to note, which the dev says it wants to make very clear, however, is that “Steam Workshop for the core Terraria game will not support Terraria mods“. These will still be handled within the sandbox game’s fan-made tModLoader tool and by the team that runs it. As of this year’s Journey’s End update, tModLoader is available on Steam as free DLC – handy if you like to keep all your Terraria content and tools in one place.

Well apparently being done with Terraria was a lie. This is the thing we are currently working on : pic.twitter.com/Yv8jGuVRXt

There’s no word on when we can expect to see Terraria Steam Workshop support go live, but in the meantime you can take a look at the existing community-made maps and texture packs on the game’s forums to get an idea of what’ll be supported when it arrives. Plus, the studio advises that, “if you have a texture pack or map that you feel would make a great addition to the initial wave of submissions, now is the time to prepare!”