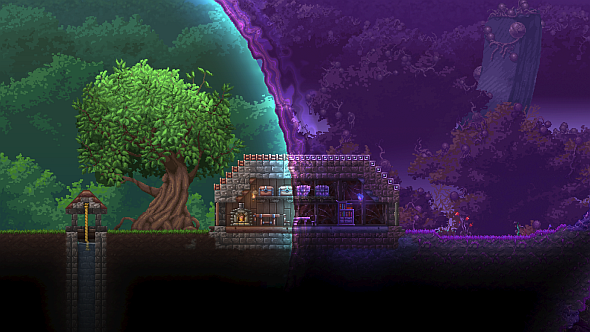 Terraria developers and IP owners Re-Logic have handed development of its spin-off, Terraria: Otherworld, to a new studio. Accordingly, don’t expect the game to be finished any time soon.

Terraria, somehow, isn’t on our list of the best indie games on PC, but lots of good ones are.

The news comes via a post on the Terraria forumsin which Re-Logic say that “in spite of all of the reforms we tried last year, the current state of the game is still equal parts far from [our] vision and well behind schedule.

“As a result, we have made the decision to move on from having Engine Software continue development of Terraria: Otherworld. Re-Logic has possession of the game (code, art, sounds, etc) as it exists today, and we have been examining the array of options available to us to get TOW to a place to where we can confidently deliver on the vision and expectations we all have for this game. After taking a good hard look at everything, we feel that a new and fresh start/direction is the only way Otherworld will ever reach its full potential at this point.”

Terraria was a 2D action-adventure sandbox game, released in May 2011 to great acclaim. Otherworld was announced in February 2015, and would’ve taken a darker spin on Terraria’s gameplay, with the addition of strategy and RPG elements such as a skill tree and a tower defence mechanic.

Unfortunately, the project has been fraught with delays and other difficulties. Dutch studio Engine were contracted to make Otherworld after their good work handling ports of the original Terraria, but in July last year, Re-Logic announced that, after a review, “It was pretty clear to us… that Otherworld needed quite a bit of work – and even a good bit of rework – in a number of areas” in order to meet their standards. The project’s lead designer and artist at Engine were replaced, but they kept at it.

Now it’s clear that Re-Logic still aren’t satisfied, and have handed the project to another studio. That studio is Pipeworks, a US-based team who handled a re-write of Terraria for console and mobile platforms, and submitted “an amazingly on-point proposal for completing Otherworld”.

Here’s hoping they wrap it up in speed and style. If you’d like to play the original in the meantime, here’s its Steam page, where a very impressive 97% of all ratings say it’s well worth the trivial £6.99 ($9.99 US) price of entry.