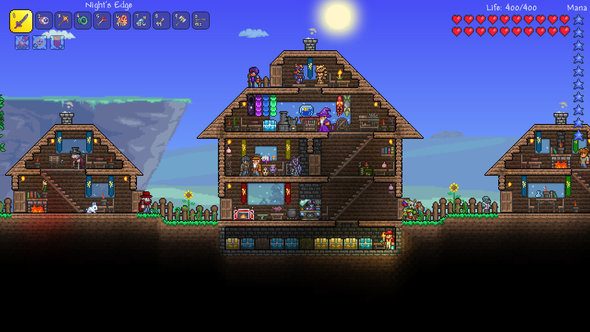 Since its release in May of 2011, developers Re-Logic have eschewed developing new games in favour of constantly updating and expanding Terraria. The result of this being that Terraria went from a game that had 250 items, six NPCs, 20 enemies, three bosses, and 10 biomes to a game that now has 3800 items, 25 NPCs, 350 enemies, 16 bosses, and 27 biomes. With that kind of commitment to their fans, it comes as no surprise that it has now passed the 20 million mark in numbers of copies sold.

For more wholesome indie goodness, take a peek at our list of the best indie games on PC.

Of course, the 2D side-scrolling survival sim has now been ported to two generations of consoles and there are even mobile versions on the way. But it began its life on the PC and that is the version which currently has by far the most content. These constant updates and new releases have led to the staggering fact that 8.5 million of the 20 million copies sold were picked up in the last 18 months alone.

It would seem that Terraria is a shining example of why it is often profitable to keep giving the fans what they want.

You can pick up Terraria on Steam for $9.99/£6.99. Or if you’re unsure about whether or not it’s worth the bucks, check out our various reviews for a second opinion.