When was the last time you thought about the periodic table? While game developers at large have been sleeping on the potential of the catalogue of elements, Ocean Spark Studios have been going hard on zinc and magnesium. They’re forging an entire world in Unreal Engine 4 based on not just fire, air, earth, and water, but a chart’s worth of real-world materials and their reactions. The result is an RPG called Tetra: Elemental Awakening.

Tetra began life as a wave-attack game with an aesthetic inspired by World of Warcraft. Ocean Spark’s three founders – Ellie Brown, Zach Cundall, and Helen Andrzejowska – wanted to retain the feel of RPG questing but root the game in the defence of townsteads rather than exploration. However, after demoing the game at EGX Rezzed in 2016, they found that players loved the look of the art, and wanted to spend more time out in the world enjoying it.

“From that it kept evolving and evolving, and turned into this massive RPG,” Cundall tells us. “But there are already so many RPGs – why would people choose ours?”

It was then that they looked to an unorthodox source for inspiration – not Lord of the Rings, nor Game of Thrones, but the periodic table.

Making islands of the elements 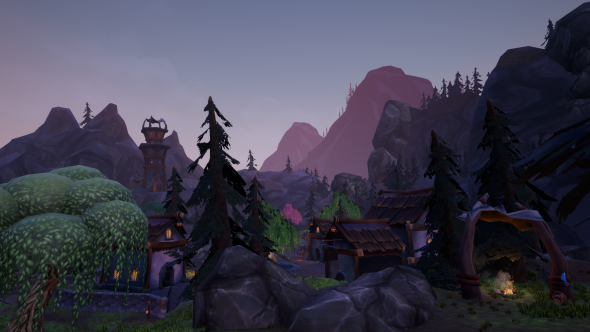 “We took the most well-known table that’s used in schools and the colours from it,” Cundall says. “If you compare the periodic table to our world map, we’ve actually split each island into the segments of Metals, Gases, Naturals, and all that kind of stuff. It really allows us to play with a unique visual style.”

Once you know this you can’t help but see it. The Forgotten Isles that make up Tetra’s world may have the meandering contours of real-world islands, but their size and placement roughly matches that of the major groups on the periodic table. Their elements influence the climate of each area, as well as the kind of flora and fauna that thrives there.

“You can see how the colour spreads throughout the islands,” Cundall points out. “That’s because, as you progress through, you’ll see the change.”

This high concept map has taken worldbuilding in some unusual directions. You can imagine that the Metals – split into four grouped islands, including the large, central Talavasi – would prompt some obvious ideas. But where on Earth do you start with, say, the Noble Gases?

“One of the concepts that we’ve got, for Aysilet, has an enormous spire in the middle,” Cundall says. Aysilet will be smothered by a strange, purple gas and lit up by electrical events. In Tetra lore, it’s a place with a reputation for killing its visitors, surrounded by shipwrecks. 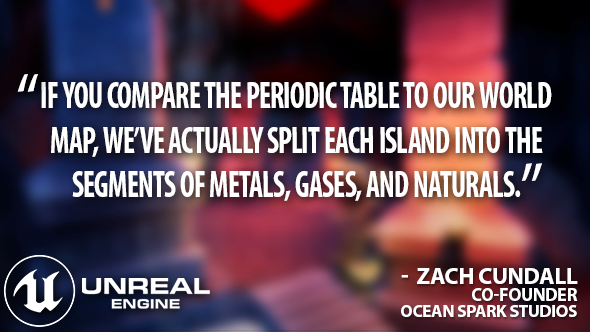 Ocean Spark have been working with a concept artist, who fleshes out the ideas for each island before the team begin the 3D world design. One piece of art has particularly captured their imaginations – a painting of the southerly Metal island of Mysk, where the tops of gnarly trees are attached to their trunks only by ghostly chains. It’s an odd image that suggests an unstable landscape, reflective of the elements the studio are working with.

“When we initially start the sculpt, we base it on the shape of what’s on the map, and then we can start to craft based on the concept art,” Cundall explains. “We can expand from that into what the environment’s going to be.”

Blocking out a world 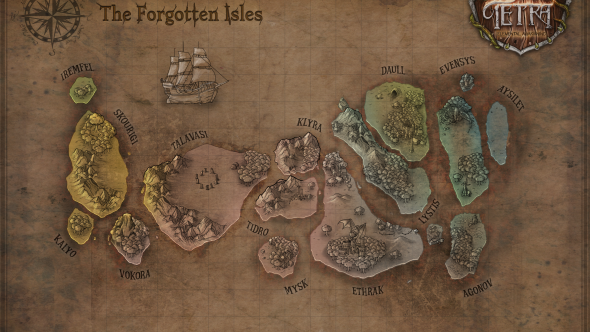 Unreal Engine 4 has been instrumental in helping this small Yorkshire team realise their ambitions for a vast fantasy archipelago.

“It’s really good at creating fast environments that you can build up from,” Cundall says. “It’s useful to be able to just throw a landscape in there, and put in some block-out shapes of where the questing areas are going to be.”

The process helps the team retain a sense for the scale of the Forgotten Isles, rather than lose focus perfecting a tiny corner of the map.

“We wanted everyone to play the game and feel like this world is alive,” Cundall says. “It hasn’t just been built around where you’re going to walk.” 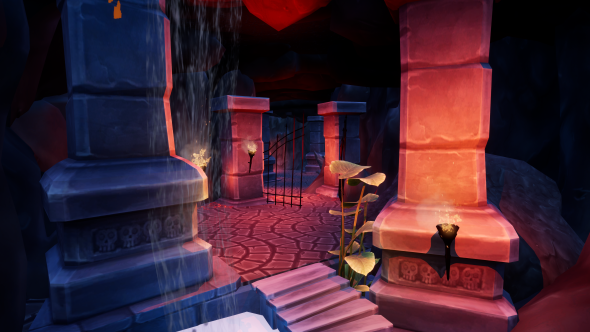 Incredibly, Ocean Spark have got this far with just three artists and no programmers, leaning on Unreal Engine 4’s visual scripting system, Blueprint.

“We’re relying on Blueprint at the minute until we can get funding or a Kickstarter that will allow us to hire a full-time programmer or two,” Cundall says. “We’ve gone through a lot of things that pulled us right down to the floor, but we’ve always kept going.”

Tetra: Elemental Awakening is in development for the PC. Unreal Engine 4 is now free.

In this sponsored series, we’re looking at how game developers are taking advantage of Unreal Engine 4 to create a new generation of PC games. With thanks to Epic Games and Ocean Spark Studios.